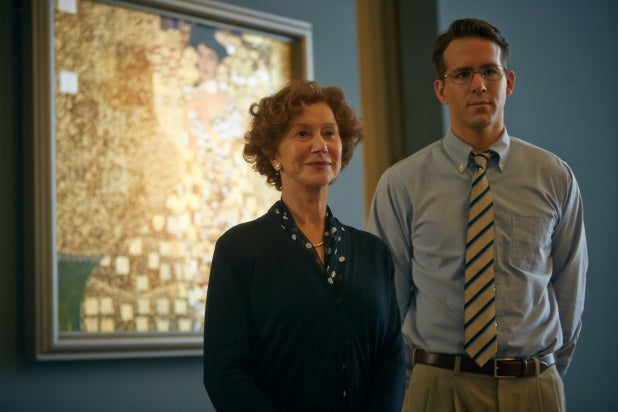 For many of us children of Holocaust survivors, Simon Curtis‘ “Woman in Gold” really hits a nerve as it tells a story about a young lawyer who accomplished what we would have liked to have done for our parents’ losses.

Luckily for E. Randol Schoenberg and art restitution justice, the young lawyer listened to his mother when she asked him to see a friend about a legal issue. His mother’s request turned out to be the case of a lifetime, and its legal triumph a great premise for an inspiring Hollywood movie.

“Woman in Gold” chronicles the challenges Maria Altmann (Helen Mirren), a Viennese Jewish refugee, faced suing the Austrian government to reclaim the artwork that rightly belonged to her family. Among those works was Gustav Klimt’s renowned painting of her aunt that was stolen from Altmann’s family, “Portrait of Adele Bloch-Bauer I.” It was considered a national treasure by the Austrian government.

Also Read: 'Woman in Gold' Review: Helen Mirren Is All That Glitters in This Paint-by-Numbers Saga

Schoenberg, played by Ryan Reynolds, is the grandson of Austrian Jewish refugees living in Los Angeles who were friends with Altmann. His grandfather was the noted composer and artist Arnold Schoenberg. When the young and inexperienced lawyer was asked by his mother to look into the legal claims of fellow refugee Altmann, Schoenberg reluctantly went to see her. Altmann’s sister had just died, and she realized that it was now or never to resolve the issue of her family heirlooms and artwork that was seized by the Nazi regime after they invaded Vienna.

We identify when the potential client and budding lawyer express their doubts about pursuing her claims when they first started. Altmann wondered if she could overcome the insurmountable odds to reclaim the works. Schoenberg hesitated representing her, citing his family obligations and lack of legal expertise to handle the case.

What transpires, however, is a legal adventure conducted by a delightful inter-generational team of client and counsel on a dedicated mission to wage justice in the Austrian courts and the Supreme Court, and we are cheering throughout the movie as they prevail.

We hear our parents speaking when Altmann says she promised never to return to Austria, and we sit up in our seats when she rescinds her vow to pursue justice for the family. She confesses in the film that she cannot let it go, even though Austrian officials warn her that she will never prevail. After returning to her birthplace, Altmann utters, “I did not come here to eat cake.” We know the nature of such a dedicated woman, as it’s how our parents made new lives in America.

The film offers an emotional catharsis for us second and third generations whose families lost so many family members and homes. The beautifully shot flashbacks to the sophisticated and art-laden life Altmann’s home had before the war are especially opulent and nostalgic. But these rich pre-war scenes are quickly voided as the Nazi invasion leads to the shattering scenes of Jews being degraded and occupied, as well as Altmann and her husband experiencing a harrowing escape from Vienna. The film retraces our parent’s traumas.

One cannot help living through Schoenberg’s pursuit of Altmann’s claims and rooting for victory throughout the film. What is also rewarding is to see how modern day Austrians offer to help Altmann as retribution for how she and her family were wronged in the first place by the Nazis, and then the Austrian museum and government.

Schoenberg, who recently visited Washington, D.C. on a press tour, is quite modest in person talking about his legal victory. He claimed that they were somewhat optimistic about how the Supreme Court would rule, as several members were cultured in the arts. He also admitted that he stumbled over the first question asked of him in the Court, as depicted in the movie. Also, actress Helen Mirren was able to listen to the taped depositions that Altmann had given to prepare for her role.

Also Read: 'The Imitation Game' Is Not Only a Tribute to Alan Turing, But One of the Most Important Movies of the Year (Guest Blog)

He explained how his late grandfather was famous for soirees for those refugees exiled in Los Angeles. In his home, Schoenberg remembers his parents speaking German when they did not want him to understand.

Schoenberg smiles when talking about Altmann, who was like the character depicted in movie–“witty, charming, yet strong willed and tough.” The big difference is that in real life Marie Altmann was older than Mirren is in real life.

The dedicated lawyer also said that part of the motivation for pursuing her case was “to tell our story.” After the case was won, Schoenberg went on to achieve that very goal by becoming very involved in the Holocaust museum in Los Angeles. Like many of us, he vows not to forget.

Those who cannot get enough of learning about the plunder of European art treasures should rush out and purchase the documentary, Rape of Europa, by Richard Berge, Nicole Newnham and Bonni Cohen. Schoenberg and Altmann are in the film.

Upon leaving the theatre I called my niece, who is studying in law school, and insisted she see the movie. The film should be shown to budding law students all over the country so they can learn how a David against Goliath legal struggle can be waged both in real life and on the screen.