Let’s get the obvious out of the way. If Tiger Woods had given even half of this morning’s 14-minute apology a few months ago, more than half of the media coverage that he angrily decried today wouldn’t have appeared.

Woods’ first real comments on his amazing mess seemed authentic and should be effective. Not to mention that the college lecture-hall setting (or was it meant to be church-like?) was micro-produced to deliver the money shots for a voracious media braced to replay and analyze. For instance, there was the pause when Woods stopped, lifted his head and framed himself straight into the camera before delivering one particularly good apologetic line. I’ve written such script directions myself to talent and executives. 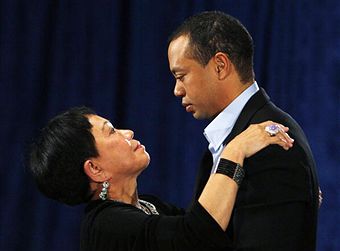 And there’s the prolonged fixed two-shot of Woods and his mother, throughout the last few paragraphs of his comments. It served as a perfect set-up for The Hug at The End. While the public feels terrible for Woods’ wife, Elin, it likely feels much worse for his mother, Kultida, who has stood by her son throughout this ordeal.

With today’s event, however, Woods’ image rebuilding campaign has fully transformed into kabuki theater. It has the same tightly contained yet meaningful gestures, story development progressing at a snail’s pace and, of course, the costume symbolism. All aimed at leading us, the audience, carefully through this drama.

Look! He’s out jogging with his protégé, both covered in Nike gear! And she’s purposely pumping gas with her ringless right hand!

As today continues to prove, however, Woods’ crisis management PR team seems to be operating under one of three principles.

There’s one school of thought that his core advisory team hasn’t ever handled a disaster of such magnitude and hasn’t brought in expertise at the level they need.

Others think their defiant refusal to undertake any of the standard steps in celebrity redemption, or fulfill them in a timely fashion, is tied to their belief that Woods remains unlike any other athlete in history and can do it his own way.

Principle 3: Woods is calling the shots and they either won’t disobey or can’t change his mind.

Along with his trailer-park taste in extramarital partners, one of the most fascinating discoveries emerging from this scandal is that Woods has been much more intensively involved in shaping his own façade than many of us had assumed. And that he, rather than his myriad handlers, might be the one who decided he could live under a bell jar.

Principle 3 is all too familiar to those of us who’ve worked in Hollywood PR, particularly with household-name celebrity talent.

We’ll only learn which was the true guiding principle for Team Tiger sometime in the future when – or, more likely, if – one of its inner circle decides to speak out. Since the pro golf industry is even clubbier than the entertainment business, the chances of that happening are a long shot, so to speak.

But whether Woods’ advisers are brilliant or boneheads, there are three external realities that also will drive this drama’s end results.

Reality 1: Despite the media’s nagging, criticizing, taunting and even pleading, there’s never been a good reason for Woods to do a press conference or sit-down confessional.

It’s simple: Why let others lead the direction of your story and cherry-pick your comments? Particularly nowadays, when every reporter or interviewer is looking to own that breakout one-line response that s/he can tweet, headline and leverage for a guest expert slot on cable news?

Today’s appearance points out the two undeniable strategic screw-ups made by Team Tiger: Its slowness in getting out responses sooner and, then, the superficiality of what ultimately was served up. Had Woods issued a lengthy print or video statement earlier with some of the language we just heard – some explanation, a strong apology and reminders of his impressive charitable commitments – he would not have had to endure this morning’s performance. And his family would have secured more of the privacy he urged on their behalf today.

Reality 2: All Woods needs to do is enough PR to get him back into competition and to keep his remaining sponsors.

My admittedly unscientific review of various online polls shows that golf fans are able to separate Woods’ professional from his personal life. They’re the ones buying the Nike Zoom Trophy shoes; I’m certainly not. So in the scheme of things, my opinion that Woods should be spayed is irrelevant.

Reality 3: The media have been a more valuable tool to Woods than his Titleist Scotty Cameron putter. Granted, his is a great story that fulfills one of journalism’s favorite truisms: There’s huge public interest when a notoriously squeaky-clean subject reveals a nasty dark side. I’m part of the mainstream who’s always found Woods talented but dull, wound tighter than George Stephanopoulus during a Lady Gaga interview. The fact that I now know who Ernie Els is proves this story’s appeal.

But in media’s frenzied advancement of the Woods saga for their own purposes, they’ve become his ultimate caddy. By reporting every snapshot – literal and figurative – and analyzing each to death among themselves, they’re advancing his goals and helping him line up his next shots. And requiring virtually no PR sweat at all from Woods himself.