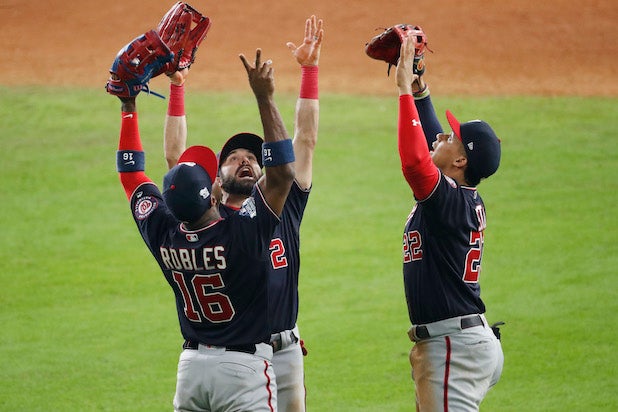 The Washington Nationals got to Houston Astros ace Gerrit Cole on Tuesday, when Fox drew an average of 12.194 million total viewers, according to Nielsen. That overall audience number is the smallest for a World Series Game 1 in five years.

And it was almost the smallest all-time TV audience for a Fall Classic. Game 1 of the 2014 series still holds that unfortunate distinction with 12.191 million viewers.

Yes, that’s a difference of just 3,000 total television viewers between last night and five years ago, when the San Francisco Giants played the Kansas City Royals.

In the important adults 18-49 demographic, Tuesday’s start received a 3.1 rating. That represents a 16% decline from last year’s opening game. In terms of total viewers, the downtick was 12%.

Read how the rest of broadcast TV did last night in primetime here.

In 2018, Game 1 of the World Series got a 3.7 rating among adults 18-49 and 13.8 million total viewers. That Boston Red Sox-Los Angeles Dodgers game drew the lowest viewer total in four years.

The Nationals beat the Astros 5-4 on Tuesday. Game 2 is scheduled for an 8:07 p.m. ET first pitch tonight on Fox. Justin Verlander will be the one attempting to throw that first strike. In the bottom half of the inning, Strasburg will take the hill for Washington.