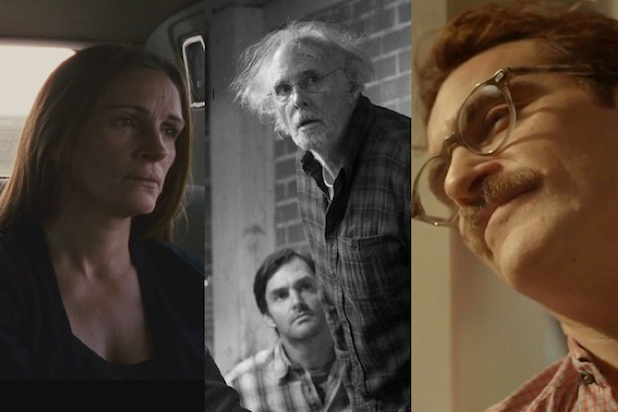 The Writers Guild of America has nominated “American Hustle,” “Blue Jasmine,” “Dallas Buyers Club,” Her” and “Nebraska” as the best original screenplays of 2013, the WGA, West and WGA, East announced on Friday.

In the adapted-screenplay category, the nominees were “August: Osage County,” “Before Midnight,” “Captain Phillips,” “Lone Survivor” and “The Wolf of Wall Street.”

The nominations were good news for “Dallas Buyers Club,” which had a second strong day on the heels of its nomination by the Producers Guild on Thursday, and for “Lone Survivor,” which picked up its first major guild nomination over contenders like “Lee Daniels’ The Butler” and “Labor Day.”

The Coen brothers’ “Inside Llewyn Davis” missed a nomination for the second day in a row.

Of the 10 WGA nominees, seven were also singled out by the PGA: “American Hustle,” “Blue Jasmine,” “Her,” “Nebraska,” “Dallas Buyers Club,” “Captain Phillips” and “The Wolf of Wall Street.”

In the documentary category, WGA restrictions and a strong, varied year for docs meant that only two of the five nominees, “Dirty Wars” and “Stories We Tell,” are films also on the Oscars’ 15-film shortlist.

Also nominated: “Herblock – The Black & The White,” “No Place on Earth” and “We Steal Secrets: The Story of Wikileaks.”

Instead, they were deemed ineligible by guild rules, which restrict its awards to films written by members or written for productions that are made under the jurisdiction of the guild’s Minimum Basic Agreement, or the agreement of several affiliated international guilds.

Every year, the restrictions knock out a number of scripts that would otherwise be in contention, including such past Oscar-winning screenplays as “The King’s Speech” and “Django Unchained.”

In the adapted category, this year’s WGA-ineligible films include “12 Years a Slave,” out of the running because screenwriter John Ridley is a non-voting member of the WGA, as well as “Philomena,” “Blue Is the Warmest Color,” “Short Term 12” and “Mandela: Long Walk to Freedom.” On the original-screenplay side, “Rush,” “Fruitvale Station” and “In a World” all failed to qualify.

The stricter qualifying rules for the WGA Awards make it the major guild award with the least correlation to Oscar nominations, with only slightly more than 50 percent of WGA nominees going on to Academy recognition over the last five years.

On the other hand, the Writers Guild has a good track record matching winners, with 16 of the last 22 WGA winners also taking home Oscars.