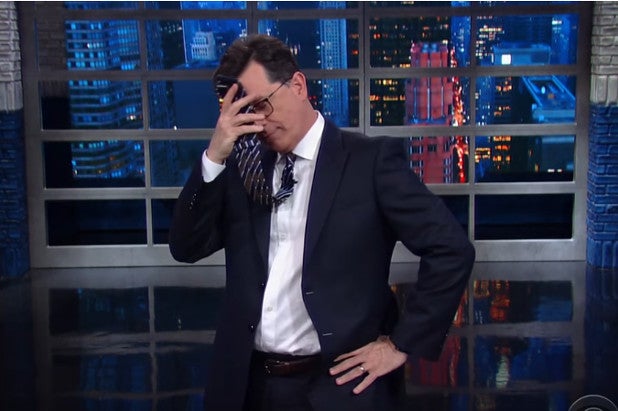 As a member of the Writers Guild, I voted with the overwhelming majority authorizing a strike if one is deemed necessary. With unions a mere Supreme Court decision away from virtual extinction, how could I possibly vote against a potential last hurrah? And yet, there was a part of me that selfishly wanted to vote no, to avoid this devastating consequence: the first casualties of a writers’ strike are the late-night shows, and these programs have never been more essential than at this surreal moment in the nation’s history.

Written coverage and commentary is at its highest level since Watergate, yet an embarrassing number of our self-serious TV “journalists” have traded places with the comedians, becoming clownish cowards while leaving the truth-telling to the comics. And so these late-night talk shows have become a national necessity for ordinary people whose lives prevent them from spending hours a day on MSNBC but are still desperate to have their sense of sanity confirmed.

Sharing this nonalternative fact — There’s a monster in the White House! — through humor makes it all the more powerful. It’s funny ’cause it’s true.

Also Read: Will Late-Night TV Go Off the Air in May? Writers Guild Threatens to Pull Plug

If there is a writers’ strike, these shows will disappear immediately, and the only voices consistently and relentlessly speaking out against this kakistocracy – government by the least qualified and most unprincipled people – will be silenced. (Another great word: trumpery. Noun: superficially appealing things that have no real value; rubbish.)

What are those millions who’ve come to depend on these shows to put them to sleep — with, if not a sense of well-being, at least the knowledge that they are not alone — supposed to do?

The Trump Administration has brought on our second Great Depression, this one emotional, and the majority of Americans are ahead of the media on this. While too many talking heads — Hello, Chuck Todd! Hey, there, Wolf Blitzer! — struggle to cover Trump as if he was anything like anyone that came before him, the late-night hosts are the voices of reason, reporting this phenomenon with the wicked, often Swiftian satire that it deserves.

The thing about Donald Trump that sane people hold against him (because I’m sorry, but if you’re okay with having a guy who brazenly mocks disabled people and laughingly boasts of sexual assault as the most powerful being on the planet, there’s something at least a little bit off about you) is his total lack of character.

That’s what attracts such rabid and unprecedentedly widespread detestation. That’s what keeps him playing oldies shows to his still-loyal-but-then-people-are-slow-to-admit-to-themselves-when-they’ve-made-a-mistake-and-this-was-a-whopper base. That base is all he’ll ever have.

If you’re not with Trump by now, there’s nothing he can say or do to bring you aboard. If you’re not with him, it’s because of who he is, and that’s not something he can change. He will always be a man who possesses not a single quality you would want your child to emulate, a tantrum-throwing septuagenarian whose behavior you wouldn’t for a moment tolerate in your toddler. And now this is the example being set for our children from the very very top of the world.

With some significant exceptions, and we all know who they are, the egregious failure of so many reporters and pundits to address the dangerous absurdity of the moment has been … disheartening. The pretense that this is just another president of the United States — okay, maybe a little rougher around the edges but still respectable — amounts to dereliction of duty. The indignity, indecency and inhumanity with which this Ugliest American so unashamedly befouls America’s soul is not normal, and yet one can easily imagine watching helplessly as media laziness inevitably turns it into ordinary.

As Les Moonves so infamously said of Trump’s candidacy during the primaries, “It may not be good for America, but it’s damn good for CBS. … Sorry. It’s a terrible thing to say. But bring it on, Donald. Keep going.” And how prescient he was! It turns out that people want Stephen Colbert’s nightly splashes of acid more than they want Jimmy Fallon’s spoonfuls of pabulum, and CBS is winning late night for the first time in decades.

As gloriously scathing as Samantha Bee and John Oliver and Seth Meyers relentlessly are, with frequent bulls-eyes from Trevor Noah and Jimmy Kimmel and Conan O’Brien — and, of course, “Saturday Night Live” — it’s Colbert who is the spiritual leader of the Resistance.

He’s out there five nights a week, freely eviscerating Trump with as clear a bias as has ever been seen on a network late-night show. (If you want to see balls, watch what he did right to George W. Bush’s face at the White House Correspondents dinner in 2006.)

Colbert’s peak Trump moment so far, the bravest and purest attack on the man’s noxious essence that anyone in the media has yet offered, occurred on February 27th.

His monologue started with one of those Trump video clips that would have shamed anyone capable of that emotion — his announcement of his discovery of something that every sentient American has known forever: “Nobody knew that health care could be so complicated.”

Here was this child-man, 70 going on 7, excusing the then-five-week-and-counting delay in the delivery of this Day One campaign promise with one of the stupidest sentences that could possibly pass human lips, and not a single reporter on the scene called him on it.

Of course, Colbert did. We cut back to him briefly suppressing the contemptuous laugh the moment deserved, then he said, “Some people knew. (Pause) A few people knew. (Pause) One or two. I can think of one. (Laughing now) I can think of one guy — tall, big smile, used to sit in your chair. Now, it’s just that you didn’t know. Okay? That’s like if I performed open heart surgery tomorrow and said, ‘Wow, nobody said it would be so wet in here.'”

And there Colbert was. “Sir,” he said, leaving time for the laughs from the anticipatory audience, “it would be an honor to say it to your face. Just walk a little bit closer to your TV screen, please,” he said, himself walking right up to the lens. “You, Donald Trump,” he pronounced as clearly as he could with his face pressed against the lens, “are a horrible, horrible human being. Horrible. A little closer. Come closer,” he went on. “Horrible! Horrible!”

Talk about speaking truth to power.

All presidents, to varying degrees, become targets of derision. Each brings to the White House his own set of imperfections, idiosyncrasies and outright flaws that provide fodder for his enemies. The president is understood to be the most criticized and mocked human on the planet. There is no job in American life less suited to a thin-skinned psychopathic narcissist.

All the late-night shows have made jokes about presidents. In the past it was always in that strictly non-partisan one-from-column-A-and-one-from-column-B way: A joke about the Democrats was inevitably followed by one at the Republicans’ expense. What’s different now is the volume and brutality of the derision Trump provokes, a tsunami of scorn. Polls show that nearly 60 percent of Americans “are embarrassed by the president” –  and who thought we’d ever see that question asked?

Donald Trump is as ignorant and unselfaware a man as America has produced. He idiotically assumed he was more than up to the hardest job in the world, and then was dismayed to find how hard it was. “I thought it would be easier,” he said. Think about it. How can a normal human being think being president of the United States would be easier than anything? That he wound up in the position of the national — no, international — punch line is a testament to either his extreme masochism or the perverseness of God, or both.

Losing the late-night shows would rob us of our most effective weapon against him, the one the Secret Service is helpless to protect him from: wit. For a man who desperately wants to be loved but will settle for being feared, being laughed at is nowhere on his list of acceptable reactions to him. To this delusional self-imagined Superman, mockery is Kryptonite.

So, though I will obviously support a strike if there is one, I’m clearly hoping there’s not. A months- or even weeks-long hiatus in the nightly ridicule ritual will have a seriously deleterious effect on all arenas of #TheResistance, demoralizing the forces of sanity while solidifying the power of ignorant lunacy.

The collateral damage may well be nothing less than democracy.

Late-night TV is in the midst of a renaissance era, afire with jokes about President Donald Trump during his first 100 days in office. Take Seth Meyers, who discussed Trump's first "100 Dayz and Confused," taking a closer look at his unfulfilled promises. He called Paul Ryan by the wrong name and assailed POTUS' plethora of tweets.
View In Gallery
BIO Paul Slansky
Paul Slansky is the author of six books, among them "The Clothes Have No Emperor: A Chronicle of the American '80s"), a political satirist whose work has appeared in dozens of publications (including The New Yorker and Spy), and a book editor skilled at helping people (including Norman Lear, Carrie Fisher, and Carole Bayer Sager) get their books out of their heads and onto the page. He is seeking help with an ambitious and highly entertaining idea to fight Trump. He can be reached by anyone who shares his sense of urgency about the direness of the moment at info@trumpelthinskin.com.

Paul Slansky is the author of six books, among them "The Clothes Have No Emperor: A Chronicle of the American '80s"), a political satirist whose work has appeared in dozens of publications (including The New Yorker and Spy), and a book editor skilled at helping people (including Norman Lear, Carrie Fisher, and Carole Bayer Sager) get their books out of their heads and onto the page. He is seeking help with an ambitious and highly entertaining idea to fight Trump. He can be reached by anyone who shares his sense of urgency about the direness of the moment at info@trumpelthinskin.com.