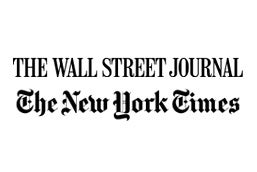 We haven’t had a good ol’ fashioned media smackdown in awhile, so I must say this is quite refreshing.

On Monday, the New York Times published a story (“Under Murdoch, Tilting Rightward at The Journal”) by its “Media Equation” columnist David Carr about the ideological shift that’s occurred at the Wall Street Journal since Rupert Murdoch bought Dow Jones two years ago.

Carr writes that under the watch of Dow Jones editor Robert Thomson and deputy managing editor Gerard Baker, the Journal has adopted “a more conservative tone … editing and headlining articles to reflect a chronic skepticism of the current administration. And given that the paper’s circulation continues to grow, albeit helped along by some discounts, there’s nothing to suggest that The Journal’s readers don’t approve.”

Carr continues: “Mr. Baker, a neoconservative columnist of acute political views, has been especially active in managing coverage in Washington, creating significant grumbling, if not resistance, from the staff there. Reporters say the coverage of the Obama administration is reflexively critical, the health care debate is generally framed in terms of costs rather than benefits — ‘health care reform’ is a generally forbidden phrase — and global warming skeptics have gotten a steady ride.”

By mid-morning Monday, Thomson fired back.

Here’s his statement (via Rafat Ali):

Statement by Robert Thomson on The New York Times

The news column by a Mr David Carr today is yet more evidence that The New York Times is uncomfortable about the rise of an increasingly successful rival while its own circulation and credibility are in retreat. The usual practice of quoting ex-employees was supplemented by a succession of anonymous quotes and unsubstantiated assertions. The attack follows the extraordinary actions of Mr Bill Keller, the Executive Editor, who, among other things, last year wrote personally and at length to a prize committee casting aspersions on Journal journalists and journalism. Whether it be in the quest for prizes or in the disparagement of competitors, principle is but a bystander at The New York Times.

And here’s Keller’s response to Thomson (via Daily Finance):

While David’s column clearly got under Mr. Thomson’s skin, I don’t see anything in his response that casts doubt upon it. The column was scrupulously fair and, if anything, understated, and I have no inclination to help Mr. Thomson change the subject.