WWE has parted ways with co-presidents George Barrios and Michelle Wilson, and shareholders in the publicly traded company are panicking.

At the time of this writing, WWE stock had plummeted 20% in after-hours trading. Four days after the Royal Rumble pay-per-view event, company shares were selling for less than $50 apiece.

Below is a snapshot of today’s activity at the time we first published this story. 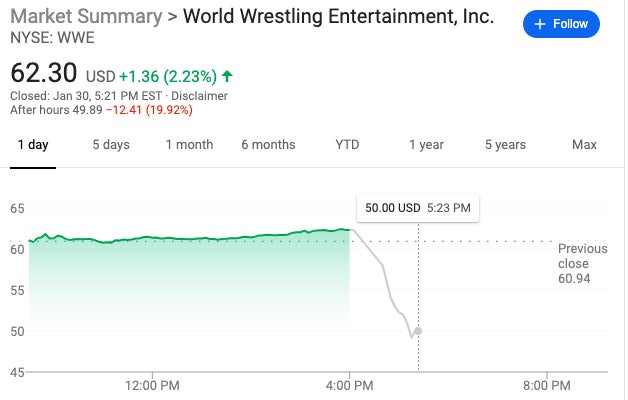 Readers can see the big and steep drop after the New York Stock Exchange rang its closing bell at 4 p.m. ET. That’s when WWE unveiled the news.

By the time the initial write-through on this post was done, shares had slipped another 2 percent.

Also Read: George Barrios and Michelle Wilson Out as WWE Co-Presidents, Board Members

“I would like to thank George and Michelle for their 10+ years of service and contributions to the organization,” WWE Chairman & CEO Vince McMahon said in a statement announcing the news on Thursday. “I am grateful for all that was accomplished during their tenure, but the board and I decided a change was necessary as we have different views on how best to achieve our strategic priorities moving forward.”

McMahon continued: “We have a deep team of talented, experienced and committed executives across the organization, and the board and I have great confidence in our collective abilities to create compelling content, engage our global fanbase across platforms, increase revenues, and drive shareholder value.”

As recently as last April, WWE stock was all the way up to nearly $97 per share. Not anymore.

Also Read: How WWE Superstar Carmella Came Up With the 'Code of Silence' Submission Move

Frank A. Riddick III, who has served as a member of WWE’s board of directors for more than 11 years, has been named the company’s interim chief financial officer, reporting to McMahon. Riddick previously served as CEO for FloWorks International, LLC, JMC Steel Group, Formica Corporation, and Triangle Pacific Corp., and president/chief operating officer of Armstrong World Industries, Inc.

WWE says it has commenced a search for both a permanent CFO and chief revenue officer.

The world’s predominant professional wrestling promotion will report its fourth-quarter and full-year 2019 earnings next Thursday.