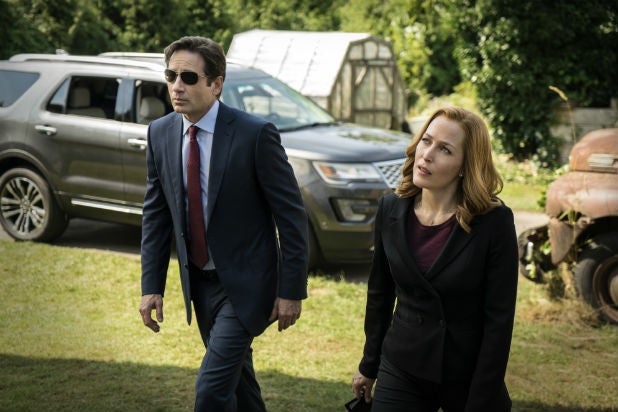 (Spoiler alert: Please do not read on if you have not watched Monday night’s episode of “The X-Files”)

The second episode of “The X-Files” event series took fans back to the “monster of the week” episodes of the original series.

The episode begins with a doctor (Christopher Logan) at a genetic research lab that works closely with the Department of Defense suffering from strange auditory hallucinations, which compel him to break into a secure server room at the lab and try to download sensitive information.

The high-pitched noises he keeps hearing eventually drive him to jam a letter opener into his brain via his ear. That scene, coupled with another in which a woman cuts a baby out of her stomach, are “among the most graphic and gruesome” the show has ever done, according to series creator Chris Carter.

“I think those are among the most graphic and gruesome images we’ve ever seen on the show,” told TheWrap. “But I don’t think the network is any more permissive. I think we just handled it in a less of a horrific way and more in an important to the story way.”

During an autopsy, Scully (Gillian Anderson) discovers the words “Founder’s Mutation” written on the dead man’s hand. Mulder digs into the man’s personal life and finds out he keeps a secret apartment. There they find files the doctor kept on children with genetic mutations.

When he and Scully investigate further, Mulder is knocked off his feet by a high-pitched sound, the same one that led the doctor to kill himself.

With the Department of Defense looking to close down their investigation, Mulder and Scully track down the man who founded the genetics lab, who prefers to be referred to as “The Founder.”

In reality, he is Dr. Augustus Goldman (Doug Savant). Goldman runs a special lab for children with genetic abnormalities, performing tests on them in an apparent attempt to cure them.

But as they dig deeper into the stories of these children, Mulder and Scully begin to dream about what their lives would have been like with their own son, William, had they not given him up for adoption during the events of the original series.

“They’re day dreams,” said. “They are ‘what if’ dreams. They are melancholy because they feel such a connection to this kid but they have no idea where he is. There’s a certain amount of them that are hopeful and a certain amount that are what they are terrified of.”

Despite this, the two determine that Dr. Goldman and the Department of Defense are experimenting on these children, who most likely possess alien DNA, in an attempt to create alien-human hybrids. Mulder also discovers that Goldman’s wife was committed to a mental hospital years earlier for killing her unborn child.

But Goldman’s wife tells a different story. She says she was trying to escape her husband when her car crashed and a high-pitched sound drove her to cut the baby from her stomach. When she came to, the baby was gone.

After re-examining surveillance footage from the lab, Mulder and Scully realize that a young janitor named Kyle (Jonathan Whitesell) links all the suspicious incidents together. They apprehend him, but only after he nearly kills Mulder with the high-pitched sound generated by his mind.

They take Kyle to be tested by Goldman, only for Kyle to demand to see his sister, Molly. Goldman initially tries to trick Kyle, but Kyle sees right through this. He is able to find Molly in the lab due to a psychic connection. With their combined mental powers, the brother and sister incapacitate Mulder and Scully and brutally kill Goldman.

“The X-Files” will air Mondays at 8 p.m. on Fox for the remainder of this season.

9 'X-Files' Episodes That Blew Us Away (Photos)

See which episodes of the hit paranormal drama made us laugh, cry and cringe

"Pilot Episode" Season 1, Episode 1: We got our first look at FBI Agents Fox "Spooky" Mulder and Dana Scully, who return to Fox soon, in the 1993 debut of the hit paranormal drama