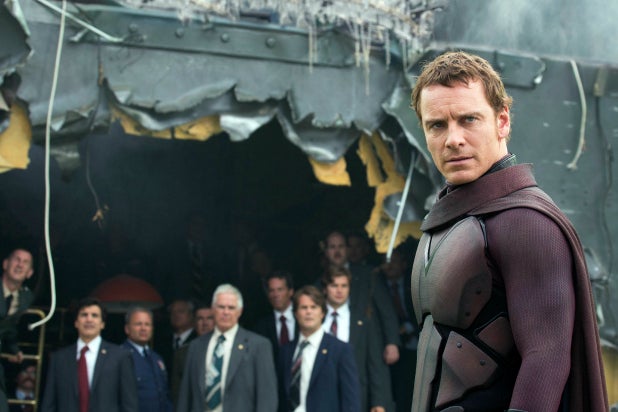 As Cole Porter never advised, “Brush up your X-Men,” especially if you want to stay afloat in the tricky, time-tripping storytelling of “X-Men: Days of Future Past.”

Do some light streaming, dig out the DVD box sets, browse the Wikipedia pages or consult the cashier at your neighborhood comic store, but make sure you come into the theater with a fairly confident grasp of what went down in “X-Men,” “X2,” “X-Men: The Last Stand” and “X-Men Origins: Wolverine” — “The Wolverine,” oddly, not so much — since the screenplay by Simon Kinberg (“Sherlock Holmes”) assumes you already know mutant chapter and verse.

There’s a healthy amount of exposition to walk you through all of this, admittedly, but given that the story also involves multiple time streams and alternate futures, it’s best not to stop and ask too many questions; here be dragons.

Bryan Singer, thankfully, is back in the director’s chair for the first time since “X2” (still the gold standard of this franchise), and he keeps things moving along briskly enough that you can just go along with the ride of Superhero Stuff without getting bogged down in the labyrinthine plotting if you don’t want to.

“Days of Future Past” opens in a terrifying, dystopian future where cities are in ruins and the streets are littered with corpses. (One of the first shots we see is of a bulldozer dropping dozens of human bodies into a mass grave, just in case you were planning on bringing any very young children.) The devastation is the result of a years-long war between the mutants (and their human allies) and the Sentinels, near-indestructible robots created by Bolivar Trask (Peter Dinklage).

Professor X (Patrick Stewart) and Magneto (Ian McKellen), now fighting together against the Sentinel threat, with Storm (Halle Berry) and Wolverine (Hugh Jackman), meet up with a crew of X-Men — including Kitty Pryde (Ellen Page), Iceman (Shawn Ashmore), Bishop (Omar Sy), Colossus (Daniel Cudmore), Blink (Fan Bingbing), Sunspot (Adam Canto) and Warpath (Booboo Stewart) — who have remained alive only because Kitty can send Bishop back in time a few days to warn them of the impending attack.

Exhausted and near defeat, the only hope for the remaining X-Men to defeat the Sentinels is to go back to 1973 and stop Mystique (Jennifer Lawrence) from killing Trask at the Paris Peace Accords; that murder not only cemented the humans’ anti-mutant sentiment, it also allowed her to be captured and having her shape-shifting DNA incorporated into the Sentinels themselves.

Before, you can ask, “Wait, what about those earlier movies where Mystique was played by Rebecca Romijn?” it’s decided that Wolverine is the only one who could physically withstand being sent that far backward in time. To stop Mystique, he’ll have to rally the younger incarncations of Professor X (James McAvoy) and Magneto (Michael Fassbender), which is no easy feat — a drunken, self-pitying Professor X is taking an experimental serum from Hank McCoy (Nicholas Hoult) that gives him the use of his legs but suppresses his mental powers, while Magneto is being held prisoner beneath the Pentagon for the assassination of JFK. (At last, a plausible explanation for the “magic bullet” theory.)

Singer clearly revels in getting to portray the whacka-chicka early 1970s, but never goes as far as “American Hustle,” even though he too gets to put Jennifer Lawrence into some stunning Qiana ensembles. “Days of Future Past” occasionally feels the burden of juggling this many characters and timelines and events; fans of the series should know that, apart from Wolverine, it’s the “First Class” incarnations of the X-Men that get the bulk of the screen time.

They even manage to add a few more mutants into the mix; springing Magneto involves the assistance of a teenaged Quicksilver (Evan Peters), whose high-speed shenanigans provide some of the film’s most exciting moments, particularly a slo-mo bullet time sequence that’s a great mix of action and comic slapstick.

Singer wisely doesn’t overload us with gigantic set pieces, saving most of his chits for Magneto’s grand climactic gesture; Abbie Hoffman would be disappointed that Magneto doesn’t levitate the Pentagon, but he does the next best thing.

While there are fun moments and a continuation of the franchise’s main idea — Professor X’s peace, love and understanding vs. Magneto’s fight the power — “Days of Future Past” ends up feeling more exhausting than exuberant.

Cinematographer Newton Thomas Sigel, a frequent Singer collaborator, helps delineate the sunny, mustard-colored early 1970s from the dark bleakness of the film’s horrifying future, but those future segments are such a bummer (and then, so quickly shunted to the background) that they throw off the balance.

There’s not a lot of time and space for acting here, but the cast wisely gets the most out of each brief moment they’re allowed to stop and talk. Josh Helman, as the younger version of one of the X-Men’s most ferocious enemies, is particularly well cast, since his smug expression is hissable even when he’s just standing in the background.

Still, this is the best “X-Men” movie since Singer went off to other pursuits, and it puts enough of a whammy onto the mutant narrative to allow future sequels to veer off in any number of directions. Too bad that in doing so, it, like “The Amazing Spider-Man 2,” often feels more like a set-up for movies to come rather than a satisfying experience in and of itself.