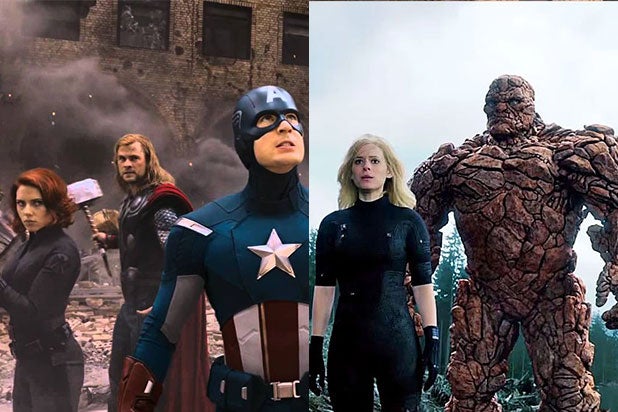 Disney on Thursday announced that it would acquire much of 21st Century Fox for $52.4 billion, meaning that top franchises like “X-Men, “Deadpool” and “Fantastic Four” will fall under the Disney umbrella — and fans are rejoicing at the reunion of the Marvel characters.

“If you people haven’t realized it yet, the single best part of Disney’s acquisition of Fox is that both the FANTASTIC FOUR and X-MEN movie franchises Will be folded into the Marvel Cinematic Universe,” tweeted one fan. “In other words, we could finally get GOOD X-MEN MOVIES.”

“Life is good,” another tweeted, while a third fan of the acquisition said, “The X-Men and Fantastic Four are home.” The film rights to Marvel Comics have been divided up for quite some time, meaning that Marvel couldn’t bring some of the characters they created into the cinematic fold.

On Thursday, Disney officially acquired much of 21st Century Fox for $52.4 billion in stock, with the mammoth deal closing after more than a month of talks. Both companies have enjoyed a healthy stock bump recently, with Disney jumping about five percent, while Fox has run up 12 percent.

The buyout infuses the Mouse House with a bevy of Fox properties, including its film and TV studios and much of its non-broadcast television business, including FX, regional sports networks and Nat Geo, among other channels. Properties like “X-Men,” “Fantastic Four” and “Deadpool” will return to the Marvel family at Disney, alongside “Avatar” and “The Simpsons.”

“The agreement also provides Disney with the opportunity to reunite the ‘X-Men,’ ‘Fantastic Four’ and ‘Deadpool’ with the Marvel family under one roof and create richer, more complex worlds of inter-related characters and stories that audiences have shown they love,” the official statement read.

The acquisition has some industry experts predicting to TheWrap it makes Disney the “most powerful company” in Hollywood.

See reactions to the news below.

I never thought I'd see the day the X-Men and Fantastic Four rights went to Marvel Studios. pic.twitter.com/Qrk8FUbO7E

If you people haven’t realized it yet, the single best part of Disney’s acquisition of Fox is that both the FANTASTIC FOUR and X-MEN movie franchises Will be folded into the Marvel Cinematic Universe.

In other words, we could finally get GOOD X-MEN MOVIES

This #DisneyFoxDeal means Avengers vs X-men movies are a possibility and the Fantastic Four come home. Happy Christmas everyone. pic.twitter.com/jVcLrdPwTM

Me: *imagines X-Men, Fantastic Four, Deadpool, Avengers, and Guardians of the Galaxy on screen at the same damn time* pic.twitter.com/A95efLh1qu

Fantastic Four and X-Men in the Marvel universe thanks to this Disney and a Fox deal ????I’m so ready for them to join the Avengers pic.twitter.com/7jfT7EUbeN

Kevin Feige when he heard he can now use the X-Men and Fantastic Four in the MCU: #Disney #Fox pic.twitter.com/QeVAwW0A2L

This means we could see X-Men and Fantastic Four in the MCU ???? pic.twitter.com/MwmUWzIVUI

Y’ALL DISNEY FINALLY SETTLED THE DEAL, THE X-MEN AND FANTASTIC FOUR ARE COMING BACK TO MARVEL !!! pic.twitter.com/80MnoJcmJ0

The X-Men and Fantastic Four are going to Marvel. We’re finally getting the Fantastic Four movie we deserve. Storm and Black Panther can be together. Life is good. pic.twitter.com/F8l0fAyDWF

Disney now has a monopoly on most of the entertainment/media industry. But they've acquired the rights for the X-Men and Fantastic Four in the MCU so I guess it's all worth it

I know it’s not always a good thing that Disney buys everything but fuck, it’s nice to see X-Men and Fantastic Four back at Marvel Studios.

The X-Men and Fantastic Four are home.