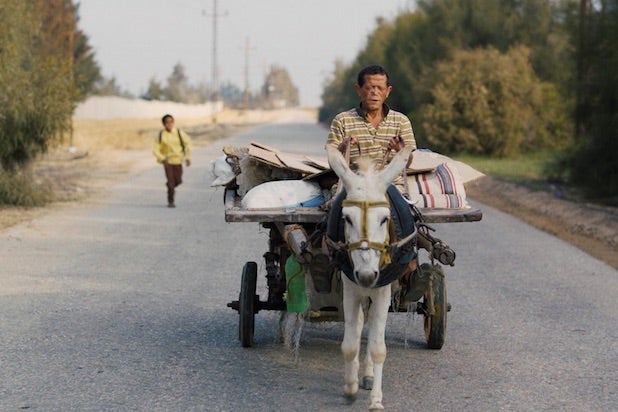 With “Yomeddine,” Egyptian-American director A.B. Shawky achieved something he most likely didn’t dare dream of: He landed a spot in the Cannes Film Festival’s prestigious main competition with his first film, a feel-good drama that began life as an NYU student film.

But be careful what you don’t dare wish for, because that acceptance put Shawky in some formidable and intimidating company. Cannes usually gives a couple of first-time filmmakers spots in the Un Certain Regard section, where reports say that “Yomeddine” was originally slated, but it’s extremely rare for a rookie director to make the main competition.

The last first-timer to achieve that feat was Laszlo Nemes three years ago for “Son of Saul” — and that harrowing Holocaust drama not only won Cannes’ grand prize (essentially, second place to the Palme d’Or) but it went on to win the foreign-language Oscar.

That’s heady territory for a film that is lighter than typical Cannes fare, and it’s a lot to ask of a 32-year-old director making his initial foray into this world. “Yomeddine” is certainly a crowd-pleaser — it received a lengthy standing ovation at the end of its premiere in the Grand Theatre Lumiere on Wednesday night, and respectful applause at its concurrent press screening in Salle Debussy — but it’s also on the slight side for a Cannes berth.

It’s one of the very few Cannes films to deserve the term sweet, and it’s no fault of Shawky’s if the festival usually avoids sweetness in its quest for more adventurous fare.

The story centers on Beshay, who has lived in a leper colony in Egypt since he was dropped off there as a child by his father. His dad promised to come back for Beshay after he was cured, but that never happened — and now Beshay, a cantankerous man of about 40 (he’s not sure, exactly) who makes his living scrounging through a giant trash dump, decides that he wants to go to his dimly remembered hometown to find his family.

Joining him on the trip is a young boy who lives in a nearby orphanage; “Obama,” as Beshay calls the boy because he’s Nubian, is the classic unwanted stowaway who ends up being an invaluable companion.

Although Beshay’s leprosy hasn’t been contagious for decades, he bears its scars on his face and hands, and thus isn’t welcome on public transportation even if he could afford it. With a rickety cart and an implacable donkey, the two set off on a lengthy journey along the Nile, where they have what can perhaps best be described as escapades.

If these mean more than the usual buddy-comedy tropes, it’s because Shawky has a knack for straightforward storytelling and because Rady Gamal, who plays Beshay, gives an affecting performance of playful charm with an undercurrent of deep sadness. He and Ahmed Abdelhafiz as Obama are a pair to root for, and Shawky gives them plenty of perils but also abundant moments of grace.

Beshay gets an “Elephant Man” moment when he’s besieged in a train car at one point, but the film is really about acceptance — and about finding community and even family in a way that Dorothy Gale from Kansas might recognize.

“Yomeddine” isn’t going to take Cannes by storm the way “Son of Saul” did in 2015, but it was never meant to be that kind of movie. Instead, it’s a charming, pleasing debut for Shawky, and a kind-hearted film in a festival that is often lacking in that particular quality.