When the Academy of Motion Picture Arts and Sciences stages its tribute to Mel Brooks on Friday, it will be honoring one of only 12 people to have won all four major show business awards — Oscar, Emmy, Tony and Grammy. Brooks has repeatedly reinvented his career, going from TV sketch writer to half of the classic “2000 Year Old Man” standup routine (with Carl Reiner) to multi-hyphenated filmmaker to Broadway impresario. Along the way, he created three of the AFI’s Top 20 movie comedies, “The Producers,” “Blazing Saddles” and “Young Frankenstein.”

He spoke with Eric Estrin about breaking his first audience into hysterics — in a drama, circumventing Sid Caesar’s manager and his unquenchable adolescent desire to enter show business.

I got into the business, I wasn’t even 15 yet. I grew up in a part of Brooklyn called Williamsburg. In the last 60 years, it’s become a chic address, but back then we paid $18 a month in rent. So in Williamsburg at that time there lived a famous actor named Don Appell – he’d come back at 11 or 12 at night and regale us little kids, if our mothers let us stay up, with stories of what was happening on Broadway. And I always said, I can do it, I can sing and I can dance; let me get into the business. 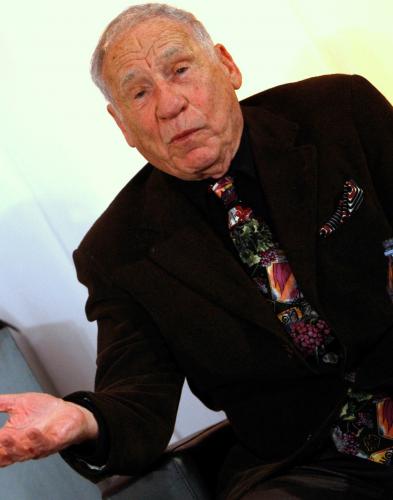 He finally said OK. They’re auditioning for people who can be busboys and waiters and be a part of the social staff at a place called the Butler Lodge in the Catskills. The resident director at that time was a guy by the name of Joseph Dolphin. So I auditioned for this guy. Of course, you had to do your normal work, which was waiter, busboy, rowboat attendant, you know, but then on Saturday night you could be in a play.

They were doing a play called “Uncle Harry” about some crazy serial killer. The only part that was open was for a district attorney. Now, I was 14, and the district attorney must have been 50 or 60. They gave me a beard and they gave me a wig — gray wig, gray beard, period clothes — and I was supposed to grill this Uncle Harry character in my office. So what I had to do was casually pour him a glass of water and try to get information out of him, and then I’d nail him when he said the wrong thing.

So I pour him a glass of water, and the glass slips out of my hand and breaks; the water goes all over the desk and the stage, and I’m mortified. I don’t know what to do. So I walk down to the floodlights, and I say to the audience, “Hey, this is my first job as an actor, I’m really only 14,” and I take off my wig and my beard, and the audience gets hysterical.

Joe Dophin, the director, leaped on the stage in a rage. I think he had a knife in his hand, and he chased me through three Catskill resorts. I ran for my life. And that was my debut in show business.

I never worked again at the Butler Lodge, but I got some other jobs as an entertainer in the Borscht Belt. And working at another place, the Avon Lodge, was Sid Caesar, also a dear friend of Don Appell, who introduced us. Sid played saxophone in the band and was a clown. They used him onstage as a comic.

Later, Sid was performing at the Copacabana, and he was very good there. I laughed my head off and I went backstage, and I liked him and he liked me, and I told him jokes. And he told me at that point there was a guy by the name of Max Liebman who was the director who had discovered Danny Kaye and had a real feeling about Sid following in Danny’s footsteps as a physical comic.

Max was doing a show and, he wanted Sid to star in it, called the “Admiral Broadway Revue,” and so Sid said to me why don’t you write me a few jokes for that. I said sure. But it was very hard because Sid had a manager who wouldn’t let me get near Sid. You know managers. He didn’t want other people to get in between him and his client.

So I finally found out where Sid’s dressing room was and I screamed outside the window. I said, Sid, they won’t let me in. So Sid let me in and I wrote a sketch for that show and he liked it. So he kind of hired me at $50 a week. The show didn’t hire me — Sid hired me.

That turned into Sid’s famous TV program, “Your Show of Shows,” but I refused to do it for $50 a week — and I didn’t want to be Sid Caesar’s personal employee. I wanted to be employed by the show. So they gave me “additional dialogue.”

It was: Written by Mel Tolkin, Lucille Kallen and Additional Dialogue by Mel Brooks.

And that’s how I broke into television.