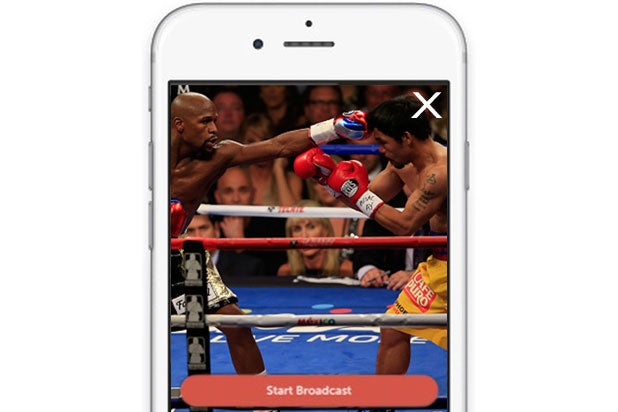 For all the fanfare surrounding last Saturday’s fight between Manny Pacquiao and Floyd Mayweather, the most exciting part of the whole affair ended up being Periscope, the livestreaming mobile app introduced by Twitter in March.

For anyone unwilling (or unable) to pay $100 for pay-per-view access to watch the event live, it was easy enough to find a feed on Periscope, which sparked a national debate around live streaming, content rights and ownership that will arguably outlast the legacy of the #MayPac fight itself.

Periscope lets users broadcast their current activity in video form as it happens, which lends itself perfectly to sharing real-time social updates … or live-streaming copyrighted content, like the multi-million-dollar Pacquiao-Mayweather fight.

Also Read: Hollywood's Guard Is Up After Periscope, Meerkat Live-Stream Pirated 'Fight of the Century'

The “social share” has become the most powerful form of modern distribution, and any growing video platform faces the same crucible: What can be done about the sharing of copyrighted material? Trying to simply block consumer uploads is not an option; we’ve learned that for every video that gets pulled down, 10 show up in its place. Copyright in the digital age has become an ongoing battle between content owners and users who employ progressive and innovative technologies to illegally share content.

This debate was first thrust into the public square when Metallica sued Napster over 15 years ago for allowing users to illegally share unreleased tracks from the group’s catalog. The young startup was eventually forced to shut its doors and cease operations over copyright infringement resulting from peer-to-peer sharing of music files.

With the advent of digital technology, which makes it so easy to share — and even easier to find — content, copyright law is ill-prepared to deal with the modern media landscape. Rights offenses happen in all forms and we will continue to see more issues arise.

Of course, we’ve seen more recent examples of this. YouTube celebrates its 10th anniversary this year, but the company would not be the leading video platform it is today had it not found a way to manage the literally unceasing influx of user-uploaded, copyright-protected videos. After major turmoil, and with the future of YouTube in the balance, the company adopted an elegant solution that allows consumers to upload their favorite video clips and entertainment moments, while allowing copyright holders to manage and monetize those uploads.

ZEFR built the technology that finds copyrighted materials across all of YouTube, for almost every major movie studio and music label, and allows YouTube users to continue sharing their favorite content without restriction. It’s really a win-win for fans and content owners alike. The recent ZEFR-SoundCloud partnership is another indication that other social sharing platforms are taking the rights issue seriously.

Periscope has the chance to be the biggest video platform to emerge since YouTube. But without a strong rights-management solution, it may end up being more of a headache than Twitter bargained for.

The author is the co-founder and co-CEO of ZEFR

BIO Rich Raddon
Rich Raddon is the Co-Founder and Co-CEO of ZEFR, a company that provides technology solutions for the biggest content owners and brands on YouTube. ZEFR allows brands to discover their most important influencers and target media against them and their audiences. Raddon is obsessed with how technology will change traditional media.

Rich Raddon is the Co-Founder and Co-CEO of ZEFR, a company that provides technology solutions for the biggest content owners and brands on YouTube. ZEFR allows brands to discover their most important influencers and target media against them and their audiences. Raddon is obsessed with how technology will change traditional media.