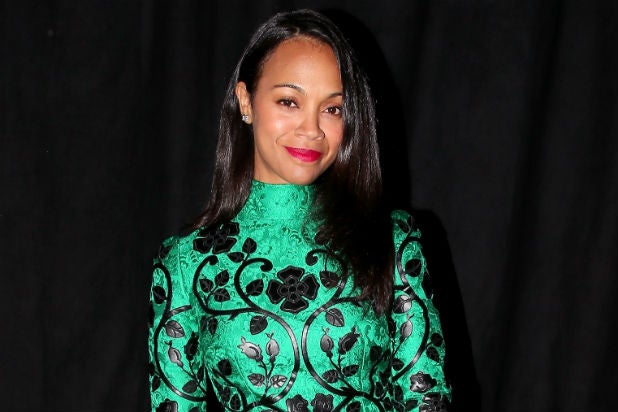 “I Kill Giants” tells the story of a young misfit girl named Barbara (Wolfe) battling both real and imaginary monsters in her life. Saldana will play school psychologist Mrs. Mollé, who plays a key role by helping Barbara face both internal and external threats, forming an inspiring bond with her in the process.

Kelly, who wrote the award-winning graphic novel he created with illustrator Ken Niimura, has also written the screenplay adaptation.

Wolfe won the lead role following a nationwide search of over 500 girls. She will next be seen in David O. Russell‘s “Joy” and opposite Bryan Cranston in Jay Roach‘s “Trumbo.”

“I’m thrilled to have the massively talented Zoe helping us bring Joe Kelly’s beautiful story to life,” said Walter. “I couldn’t be more excited to see Mrs. Mollé, a kind, strong and incredibly inspirational character up on the big screen.”

“Madison is an extraordinary young actress and we are thrilled to have her join the cast,” added Columbus.

Filming is set to begin in early 2016. XYZ is handling international sales and is currently meeting with distributors in Toronto. The company has already closed sales in multiple territories including Sun in Latin America, Falcon in the Middle East, Camimovie Srl in Italy, and Abbolita in SE Asia, South Africa, Greece, Portugal and Turkey, and international airlines with Entertainment in Motion.

Last year, Saldana starred as Gamora in Marvel’s box office smash “Guardians of the Galaxy.” She also recently starred as the titular character on NBC’s event miniseries “Rosemary’s Baby.” She has notably starred in the highest grossing film of all time, “Avatar,” and in the hit “Star Trek” movies. She was most recently seen opposite Mark Ruffalo in “Infinitely Polar Bear” and will soon reprise her roles in the third “Star Trek” installment and in multiple upcoming “Avatar” sequels.

Walter is best known for writing and directing the 2014 Oscar-winning live action short “Helium,”which was produced by Magnusson. Kelly is also a partner in Man of Action Entertainment, creators of the team and characters in Disney’s Oscar winner “Big Hero 6.”

Saldana is repped by ICM Partners and Morris Yorn, while Wolfe is repped by Clear Talent Group and Untitled Entertainment.