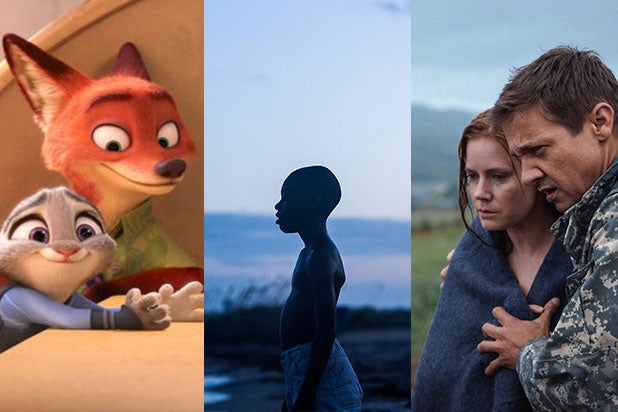 Walt Disney’s “Zootopia” marks a rare but not unprecedented animated film to make the American Film Institute’s annual list of top film and television shows, which was announced Thursday out of Los Angeles.

The Jason Bateman-voiced project joins awards front-runners like “La La Land,” “Moonlight” and “Arrival” as the institute’s picks for 10 best features of the year.

Rounding out the top film pics were “Sully,” “Hell or High Water,” Hacksaw Ridge,” “Manchester by The Sea,” Martin Scorsese’s “Silence” and “Fences.”

Noticeably absent from the list are awards players like “Loving,” the Jeff Nichols film about America’s interracial marriage ban, “Hidden Figures,” about African American women in the space program and the multi-generational drama “20th Century Women.”

On the TV side, the AFI honored Netflix’s buzzy royal drama “The Crown” and its sci-fi phenomenon “Stranger Things.” NBC’s juggernaut “This Is Us” also ranked (as the lone broadcast show), joined by FX’s Donald Glover vehicle “Atlanta” and — naturally — HBO’s “Game of Thrones” and its quiet true-crime limited series “The Night Of.”

A glaring omission in that field is the pricey fan-favorite “Westworld,” also set up at HBO, which sees an all-star cast contemplate artificial intelligence and humanity at an adult amusement park set in the future.

“The Americans,” “The People v OJ Simpson: American Crime Story,” “Better Call Saul,” and “Veep” round out the TV list.

A special recognition was given to “O.J.: Made in America,” the ambitious and critically beloved docuseries from ESPN.

The isolated honor comes at an interesting time, as the industry ponders if  a doc like “OJ” should be counted as TV or film (it’s nearly 8 hours in length, and had both theatrical and TV rollouts).  This special award would seem to sidestep that debate.

AFI TV PROGRAMS OF THE YEAR
“The Americans”
“Atlanta”
“Better Call Saul”
“The Crown”
“Game of Thrones”
“The Night Of”
“The People v OJ Simpson: American Crime Story”
“Stranger Things”
“This Is Us”
“Veep”

"Jackie" director Pablo Larrian called Natalie Portman, "our queen," while introducing the feature at AFI on Nov. 14. A tremendously pregnant Portman posed with the twins who play "Jon-Jon," Aiden and Brody Weinberg.