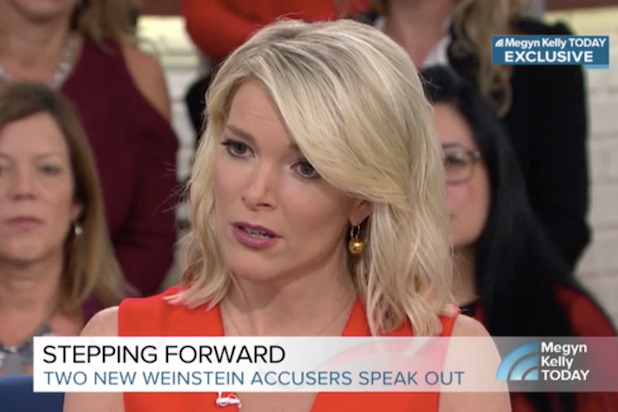 Megyn Kelly has gone all-in on sexual harassment coverage lately — and it’s working for her.

The third hour of the “Today” show’s TV ratings grew double digits last week, when Kelly welcomed guests with allegations of inappropriate behavior by prominent men in Hollywood and the media.

For the week of October 23, “Megyn Kelly Today” rose 10 percent versus the average from previous week; the hour’s 2.338 million total viewers was its largest audience since premiere week, per Nielsen.

Over the past couple of weeks, few — if any — have interviewed as many Harvey Weinstein accusers on camera as the NBC News employee has.

Thus far this week, Kelly has continued to trend in the right direction. On Monday and Tuesday, the Fox News Channel alum averaged 2.5 million total viewers at 9 a.m., with 774,000 of those audience members coming from the main demo.

On Monday, Kelly featured Mark Halperin accuser Eleanor McManus on her show. Tuesday was Halloween, which is typically a solid day for all of the morning and daytime talk shows.

That said, the “Today” show’s third hour is still in the red year over year. Through five weeks, the 9 o’clock hour is down 31 percent in the main demo and 19 percent overall.

But the news cycle suggests that these sexual misconduct stories aren’t going away anytime soon, so we’ll keep an eye on how many people are keeping an eye on how they play for “Megyn Kelly Today” over time.

Perhaps Kelly can apply this strategy to “Sunday Night,” which could use an injection of new viewers next summer in the newsmagazine show’s anticipated sophomore run.