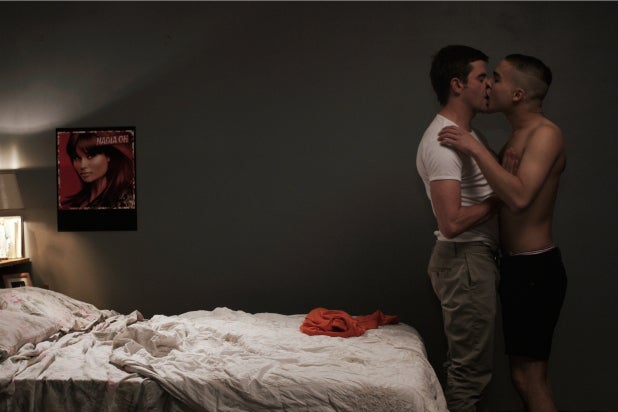 Writer-director Jérôme Reybaud’s first feature film “4 Days in France” is being billed as a movie about a man who leaves his boyfriend for a road trip odyssey dictated by the mobile gay hook-up app Grindr. Yet nearly all of the scenes in this meandering 141-minute picture involve the protagonist Pierre (Pascal Cervo) being accosted on the road and elsewhere by vibrant and judgmental women.

The film begins with a shot of Pierre’s sleeping lover Paul (Arthur Igual, “Stefan Zweig: Farewell to Europe”) as the light from Pierre’s phone illuminates his body. Pierre is soon out the door and driving through the streets of Paris right before dawn, and Reybaud serves up the first of an interminable series of shots from Pierre’s point of view as he drives. When the viewpoint switches, we are left looking at Pierre’s solemn, deadpan face, which never expresses much of anything.

We see Pierre in a men’s restroom where there is graffiti on the walls with phone numbers, and he calls one of them in order to hook up the old-fashioned way. Pierre then picks up a female hitchhiker dressed in red, and she hears the alerts from Grindr on his phone. He tells her to write back to one of the messages and say that he is sexually versatile. “So you have no set desires?” she asks. “I desire what the other desires of me,” Pierre says. “I play the role he wants me to.”

Reybaud signals both his ambition and his lack of focus with a long moving camera shot after Pierre has dropped his hitchhiker off where she has a gig at a retirement home. The camera moves with Pierre as he slowly walks away from the building and stares at his phone, and we eventually see the hitchhiker through a window as she starts to sing and perform. The camera follows Pierre to a point in a road, and then it bewilderingly keeps on moving and looking past him to the right, effectively staring at an empty space. And then the camera very weirdly moves back to the left and past Pierre again.

This “sequence shot” suggests that Reybaud would like to imitate a stylistic signature of a director like Theo Angelopoulos, whose films are made up of long and steady camera movements like this. But in an Angelopoulos film, the camera always leads us somewhere for a clear reason. If Reybaud wants to signal Pierre’s own aimlessness with a seemingly aimless shot, he has confused style with content. Just because Pierre doesn’t know what he is doing doesn’t mean that the camera should behave as he does (unless that camera is more clearly from his point of view).

Back in Paris, Paul realizes very quickly that Pierre has abandoned him, and he soon drives off to pursue Pierre via Grindr. We learn very little about Paul and Pierre and their relationship from this movie, aside from the fact that Paul seems to be rich and Pierre has some literary aspirations that have gone nowhere, which is why he is having an early mid-life crisis at age 36.

There is an amusing scene where Pierre sleeps with a 20-year-old guy who turns his statue of the Virgin Mary to the wall before they have sex. This boy wants to go to Paris, and he wants Pierre to take him. “Let chance guide you,” Pierre says. “Your face will do the rest. Beauty authorizes everything.” He seems to be talking about himself here, but these insights are dropped in all the scenes that follow where Pierre keeps meeting women who insult him or tell him off. His other two attempted pick-ups with men only lead to frustration and a chance for Reybaud to mimic the prison scenes from Jean Genet’s classic 1950 short “Un chant d’amour.”

The best scene in “4 Days in France” belongs to an actress named Judith (Liliane Montevecchi), who speaks to Pierre on the phone about the glory and the danger of living a life “without a safety net.” Montevecchi gives a heady sort of emotional and intellectual charge to this speech, but her words of warning get forgotten as Pierre keeps driving and driving without any clear aim.

“4 Days in France” badly needs some cutting and some focusing of all the material Reybaud shot of Pierre on the road because similar scenes with too many different characters start to blur and cancel each other out. It’s as if Reybaud wants to put in every scene and character he has ever thought of in one film, and so his two main characters get lost.