With an all-star cast led by Seth Rogen, “Neighbors 2: Sorority Rising,” fell far short of expectations this weekend as it opened to $21.8 million domestically.

That’s less than half the $49 million opening for the 2014 original, which emerged as a breakout hit and raked in $150 million from North American theaters when all was said and done.

The sequel’s performance also fell well short of the $36 million that analysts had been projecting in the days before the opening.

Universal’s R-rated comedy dutifully brought back its original stars Rogen, Zac Efron and Rose Byrne, this time pitting them against a houseful sorority sisters next door (instead of the frat house in the original), featuring new addition Chloë Grace Moretz.

R-rated original comedies are some of the most consistent performers of the summer, noted ComScore senior analyst Paul Dergarabedian — which makes the weak opening all the more perplexing.

“Their edgy content combined with originality has fueled hits like ‘Superbad,’ ‘The Wedding Crashers’ and of course the original ‘Neighbors,’ just to name three,” he told TheWrap. “Way back in 1998, ‘There’s Something About Mary’ became a R-rated summer comedy phenomenon and just one year later the first ‘American Pie’ showed that this was no fluke.”

Compared to successful R-rated comedy sequels “22 Jump Street,” “The Hangover II” and “American Pie II” — the last two of which proved to be immune to abysmal reviews — “Neighbors 2,” even with a low 61 percent Rotten Tomatoes score, proved surprisingly weak with ticket buyers.

Still, the movie, which was made for a reported $35 million, ranks only 26th among the opening weekends of all R-rated wide releases, above “Horrible Bosses 2” and the Oscar-winning drama “The Revenant.”

Here are five reasons why audiences decided they didn’t want to settle in next door for another “Neighbors 2.”

Also Read: 'Neighbors 2' Is 'One of the Best Comedy Sequels Ever Made,' and 8 Other High-Five Reviews

But his box office track record since “Neighbors” in 2014 has been spottier. The performance of that December’s “The Interview” carries a big asterisk given that the release was disrupted by the highly publicized threats from North Korean dictator Kim Kong-Un.

Last year’s holiday comedy topped out at $43 million domestically on a $25 million budget.

2. Russell Crowe and Ryan Gosling Were Worthy Adversaries
“The first film benefited from having a lot less competition from new movies in its opening weekend than the sequel does,” Rotten Tomatoes editor-in-chief Matt Atchity told TheWrap.

The original opened against “Mom’s Night Out” and “Legends of Oz” — neither appealing to young, male-skewing audiences. But “Neighbors 2” faced off against not just the animated family film “The Angry Birds Movie” but two movies appealing to similar audiences: “Captain America: Civil War” in its third weekend and the R-rated action comedy “Nice Guys” starring Russell Crowe and Ryan Gosling.

So all the pans that drove “Neighbors 2” to 61 percent on Rotten Tomatoes may have taken a bigger toll than anticipated. “‘The Nice Guys’ has really been marketed as a comedy,” Atchity said. “So you could say that the two movies split the audience that was looking for adult comedy this weekend.”

And if moviegoers were deliberating between the two, critical reception may have been the big influencer. 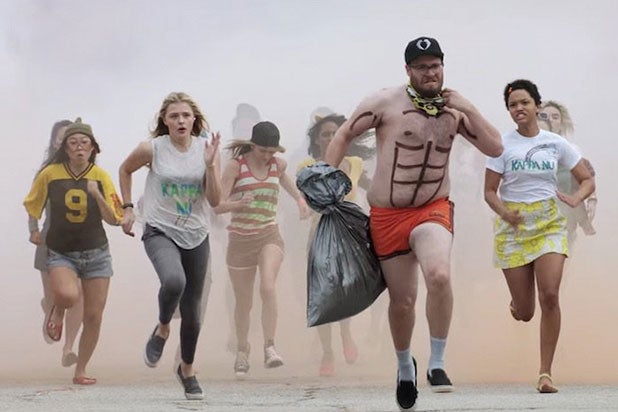 4. Chloë Grace Moretz Isn’t (Yet) a Box Office Draw
The talented 19-year-old was promoted heavily in the marketing of the movie as one of the main new elements of the sequel.

But she’s coming off the poor box office performances of two young adult adaptations in which she was the lead, “The 5th Wave” and “If I Stay.” She has yet to demonstrate her bankability.

5. Comedy Sequels Are Becoming More Challenging
“Even the most inspired comedy sequels have a tough go at the box office,” Exhibitor Relations senior analyst Jeff Bock said. “Just look at ‘Zoolander 2’ and ‘Ted 2,’ most recently.”

Bock points to an ethereal X factor that comedies must have in order to succeed. “The problem is, comedy is a delicate balance of pop culture zeitgeist and chemistry. Sometimes that ship sails away quickly,” he said, arguing that “Neighbors 2” simply didn’t have a fresh enough hook to compel audiences to buy tickets.
“The comedy genre, perhaps more than any other, relies on broad, clever concepts, and audiences inevitably respond to comedies that seem fresh and inventive. That’s very difficult to do with comedy sequels, which is why most comedy franchises stall out before they become a trilogy.”

With "Captain America: Civil War" and "Neighbors 2" coming out within two weeks of each other, it's likely you've seen the posters for these two films alongside each other and noticed something about them...