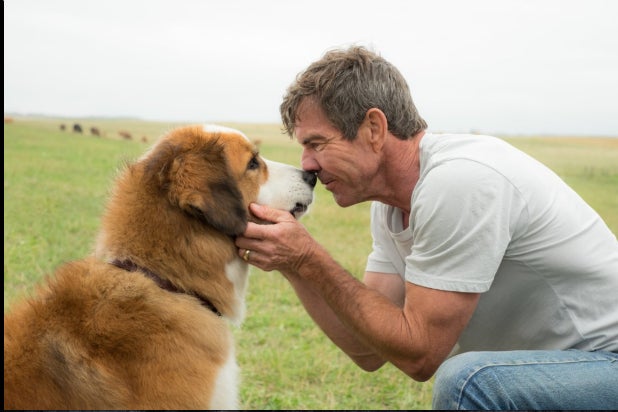 Anyone who makes their movie selections based on IMDb’s user ratings is probably going to skip “A Dog’s Purpose.”

The Amblin Entertainment production, which is distributed by Universal Pictures, currently has a big, fat “1 out of 10” rating. As a matter of fact, 94 percent (and counting) of users have rated the film a “1.” Here’s the thing, though: “A Dog’s Purpose” doesn’t even come out until next Friday, January 27.

The amateur film critics are mostly reacting to upsetting footage leaked from the set of the movie, which shows a dog trainer lowering a German Shepherd named Hercules toward a pool of rough water. The dog looks spooked, to say the least — and animal lovers are furious. PETA isn’t any happier, and has called for a boycott of the movie.

For its part, Amblin provided TheWrap with the following statement:
“A Dog’s Purpose,” produced by Amblin Entertainment and distributed by Universal Pictures, is a celebration of the special connection between humans and their dogs. And in the spirit of this relationship, the Amblin production team followed rigorous protocols to foster an ethical and safe environment for the animals.

While we continue to review the circumstances shown in the edited footage, Amblin is confident that great care and concern was shown for the German Shepherd Hercules, as well as for all of the other dogs featured throughout the production of the film. There were several days of rehearsal of the water scenes to ensure Hercules was comfortable with all of the stunts. On the day of the shoot, ‪Hercules did not want to perform the stunt portrayed on the tape so the Amblin production team did not proceed with filming that shot.

Hercules is happy and healthy.”

The movie has not yet screened for critics so it’s too soon for other popular review websites like Rotten Tomatoes and Metacritic to have ratings for next week’s release.