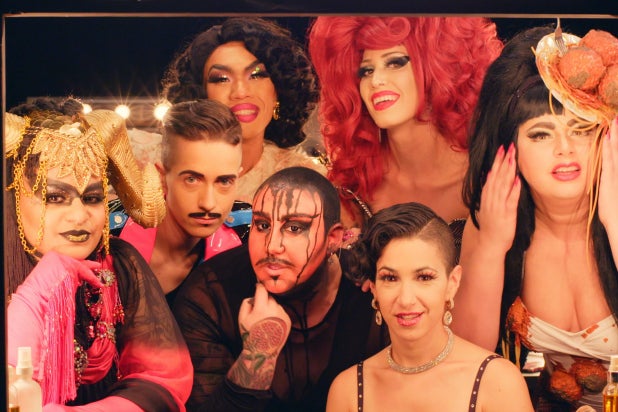 A subversive property fully integrated into mainstream consciousness, “RuPaul’s Drag Race” has popularized the inherently defiant, shape-shifting art of drag even among audiences outside of the LGBTQ community. Though its legacy of visibility is undeniable, it’s also true that it’s sanitized drag for basic cable. Hitting such a level of exposure was bound to limit its audacity.

In 2006, three years before the first episode of that VH1 show aired, the Switch n’ Play drag collective was established in Brooklyn to provide queer artists a welcoming platform to engage with their gender identities through performance. Clocking in at just a few minutes over an hour, director Cody Stickels’ proficient documentary, “A Night at Switch n’ Play,” harnesses a typical evening at the Branded Saloon in Prospect Heights, where the group regularly puts on their show, as a framing device for an introduction to each of its members.

Unlike the restrictions that traditional television imposes on RuPaul, “Switch n’ Play” is unrated, a place where real experimentation and provocation converge for the enjoyment of mostly queer audiences in a humble space with a small stage. Here, away from advertisers’ concerns or general viewers’ moralist prejudices, drag and burlesque intermingle with boundless risk-taking freedom.

Utilitarian in execution, Stickels’ homage to this not-so-hidden gem of NYC queerness mimics the opening of a reality show as participants introduce themselves with a catchphrase and a pose. Its simplistic concept features an act followed by an interview with the entertainer reflecting on their on-stage persona.

The two-part process repeats until all of Switch n’ Play’s queens and kings have gotten their moment in the sun. When diegetic music from the show itself is absent, the score sounds noticeably generic, as if ripped directly from the stock folder of editing software.

Radiant enough to demand attention in spite of the film’s uninventive structure, Stickels’ subjects are far more memorable than the piece that contains them. Pedestrian craft aside, the doc does reflect the sensitivity required to portray these individuals mindfully in all their non-conforming rawness, from their preferred pronouns to the reclamation of their physical traits, not as inadequacies, but as parts of an unapologetically beautiful whole.

Led by Miss Malice (she/her), a high-fem performer and “FeMC,” this band of provocateurs grapple, question, and deconstruct archetypes in the wide spectrum of masculinity and femininity. Flaunting their androgynous beauty, Pearl Harbor (they/them) filters sensuality through a non-binary prism that’s at once elegant and primal. Meanwhile, Divina GranSparkle (she/her) blends the grotesque with whimsy, which could mean making a Twinkie ejaculate or pulling raw meat out of her vagina.

Partly a stagehand but always part of the show, Zoe Ziegfeld (she/her/they/them) reinterprets female sexuality displaying her natural body hair as a statement and giving her outfits an aggressive edge. Then there’s drag king K. James (he/him), who carries himself with a virile demeanor, minus the toxicity.

Also challenging traditional manliness, Vigor Mortis (he/him) lets vulnerability seep through the pores of his imposing presence, while Nyx Nocturne (they/them) pushes buttons via the macabre, resulting in interchangeable horror and exuberance. Referring to Nocturne, Miss Malice says they “body as a medium,” a statement pertinent to how all of these embellished beings exploit their flesh-and-blood canvases.

The Avengers of gender expression, as they should be known, have forged an unabashedly queer space for themselves and their audiences, whose crumpled-up dollar bills and deafening cheers are not only validation but also a joint battle cry. “Us existing is a fight,” Divina GranSparkle says regarding how the mere act of exhibiting their truth — granted, in exaggerated form — is resistance embodied.

In their compartmentalized presentation, Stickels’ conversations with the Switch n’ Play gang only scratch the surface of their lives once the makeup and eye-popping garments come off. Who they are during their time at Branded Saloon takes center stage; the rest is either briefly mentioned in the context of how it relates to their drag, or not at all.

A testament to their intrinsic magnetism and the representational relevance of their work, the gang transcends both unremarkably serviceable filmmaking and the lack of extra emotional depth that would have lent the doc gravitas. Far from an ideal tribute, at least now they will be more widely seen.