A version of this story first appeared in the Actors/Directors/Screenwriters issue of TheWrap’s Oscar magazine.

Aaron Sorkin has been writing plays since 1984, films since 1992 and television since 1998 — but despite his success with the films “A Few Good Men,” “The American President,” “The Social Network” and “Steve Jobs” and the TV series “Sports Night,” “The West Wing” and “The Newsroom,” he had never directed a film until this year’s “Molly’s Game.”

The film stars Jessica Chastain as the real-life Olympic skier who ran afoul of the law after running a series of high-stakes, star-studded poker games in Los Angeles and New York. Sorkin and Chastain sat down with TheWrap to talk about the film, with stops along the way to talk about Harvey Weinstein, Gilbert and Sullivan and who Sorkin really wanted to cast in the lead role.

I first saw this movie in early August. But when I saw it again in November, after everything that’s happened in between…
JESSICA CHASTAIN Hello!

…there was a new resonance to the abusive boss, the woman who’s being used and the hard drive full of secret misbehavior that could bring down powerful men.
AARON SORKIN Yeah. Suddenly, and unfortunately, the movie became surprisingly relevant in a way we didn’t expect. Ever since the New York Times piece came out about Harvey Weinstein, I have been saying that I had no idea. And I honestly didn’t.

Except that Molly would tell me, and she writes about it in the book, the way that the guys at the game talked about women. I have been around guys who talked like that. It’s not the way I talk, and not only would something that crude never come out of my mouth, I would never have a character say it, no matter who the character was. And it should have occurred to me that when guys are comfortable talking that way, there’s a pretty good chance they’re behaving that way, too. I should have been smarter about it.

CHASTAIN I think you’re being too modest. When you look at all of Aaron’s work, you do see that he’s a political filmmaker, and he definitely writes social commentary. So as this was being written, Hillary Clinton was in the news. And women in media were in the news. And there were different standards for women and men. He writes stories that force us to look at ourselves and be better.

Also Read: Jessica Chastain Says She 'Would Kick Any Clown's A-' If She Was in 'It' Sequel 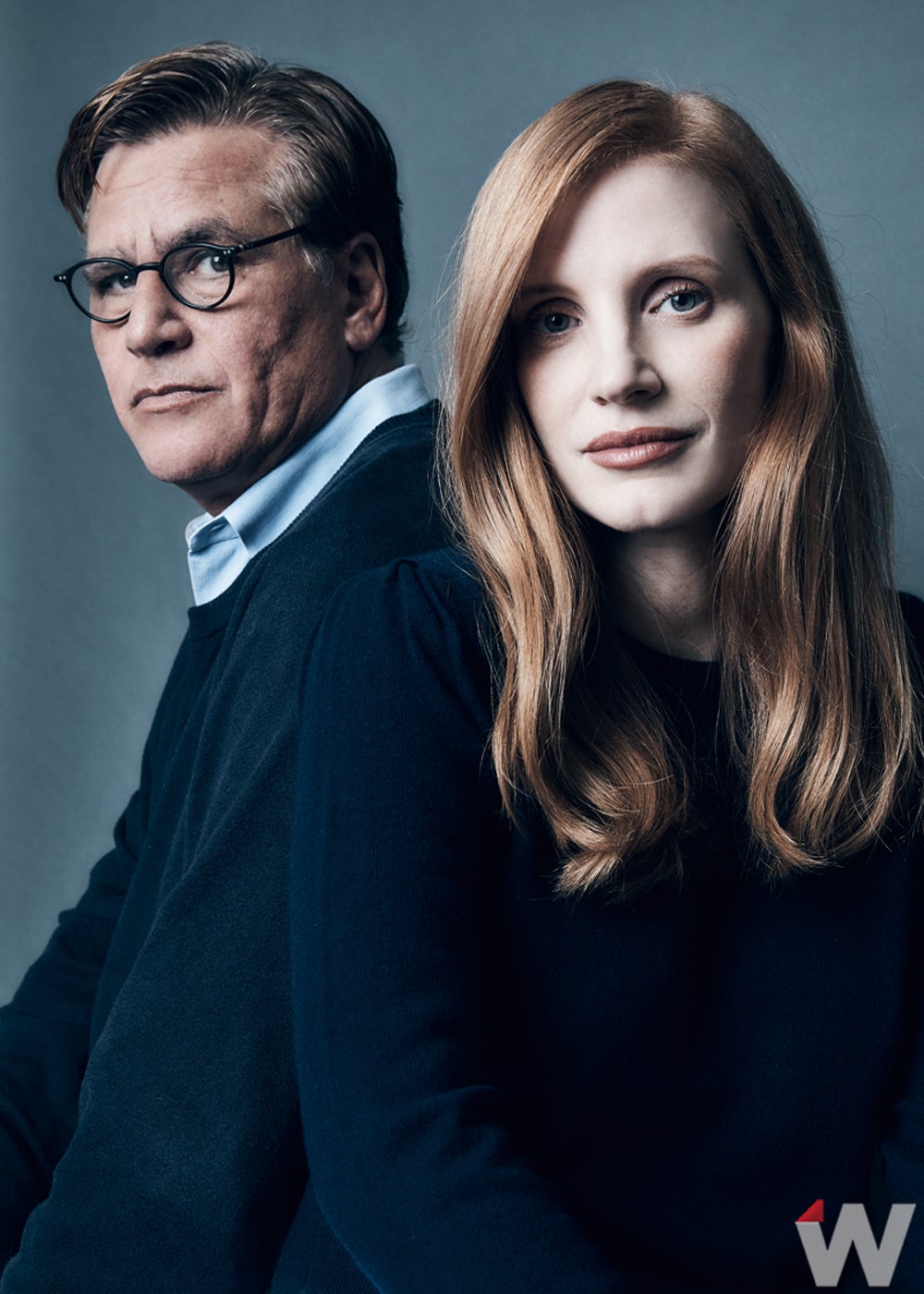 Did the political aspect of this have a lot to do with why you wanted to do it?
CHASTAIN Do you know who I am? [Laughs]

Well, yes, I do.
CHASTAIN Absolutely. The major reason, of course, was to work with Aaron. But when I got the script, I was just blown away by the story he was going to tell. Molly, for me, is a representation of every woman. Any time one demographic is in control of the livelihood of a minority or a group of people, there are going to be abuses of power. And so reading the script, I really felt like, “Here is this person who sees me.”

And also, because you brought it up, I will say that after that article came out in the New York Times, I was very vocal about retweeting and doing whatever I could to support these women [who spoke out]. And Aaron was the very first person who sent me an email telling me that he was proud of me.

The industry didn’t run toward me with open arms and say, “Good for you.” It’s a scary thing to start to amplify the voices of the victims who are calling out people in Hollywood. And Aaron was the first one who sent me an email.

SORKIN Good for you, indeed. I mean it. I’m proud of Jessica every day. Never more so than the 49 shooting days that we had, when she came to the set completely prepared to do seven-, eight-, nine-page scenes. We never really talked about this, but I really enjoyed seeing what happened between the first and second take.

SORKIN Everything. After the first take, I could have said, “Check the gate, we’re moving on.” We had a good performance, and you knew it.

CHASTAIN I wouldn’t have been happy to move on after the first take!

SORKIN It was like, ‘That was good, I’m Jessica Chastain, I know how to drive a car.’ But then something happened on the second take where, I don’t know, maybe you just need one to warm up, or that first one gives you confidence. Jessica has another gear that you don’t know is there. Moreover, the other actor responds to it. Idris [Elba] was also terrific on the first take, but just as soon as Jessica started in on the second take, you could almost see him light up with, “Oh, this is how it’s going to be. You’re not kidding around.”

Does it take a certain type of actor to handle Aaron Sorkin dialogue?
SORKIN To begin with, you have to have a facility with language. But that’s just the starting point. As for “a certain type of actor or actress,” that suggests that there are a lot of them. Or even as many as a handful. And there aren’t. To play this part, an actress has to hoist the movie on her shoulders in the first frame, run at full speed and not let it down until the final credits roll. I can only think of one actor who can do that. [Pauses] She wasn’t available, so we got Jessica.

SORKIN See what I did there? You didn’t see it coming.

CHASTAIN No, I did! I was waiting for you to say Meryl. Or Daniel Day-Lewis. That’s his favorite.

SORKIN He is my favorite, but he wasn’t right for Molly.

CHASTAIN I know that for an actor, you just can’t show up with this kind of material. That’s for sure. The actor can’t be someone who’s “in the moment,” and relies on their instincts. There’s a lot of great actors out there who don’t want to learn the lines, they want to be surprised. Don’t even try. Don’t even go near an Aaron Sorkin script. 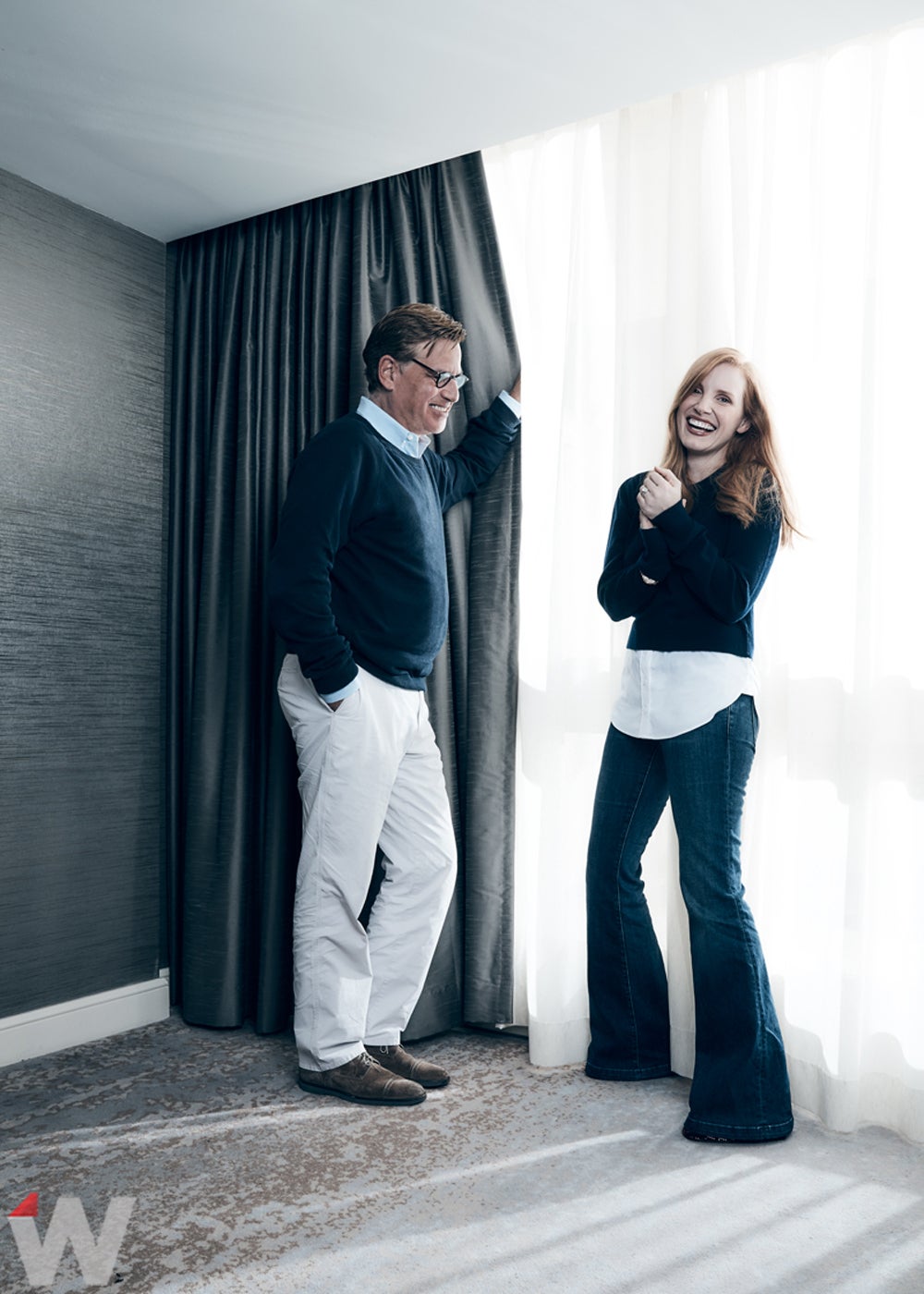 Aaron, your movies are usually full of smart people talking fast. But they’re usually talking to each other–and in this case, a huge amount of what Molly says is straight to us, in voiceover. That’s uncharacteristic for you.

SORKIN This is the first time I’ve written any voiceover. I wanted Molly to be the one telling the story, and I wanted to get Molly’s voice fully into the movie. And yes, I do write people talking fast in rooms.  I grew up really enjoying the sound of smart people disagreeing with each other, and I wanted to imitate that sound.

CHASTAIN Do you like smart people who disagree with you? Is that what you’re saying?

SORKIN I love smart people who disagree with me, even on days when I would like to bounce them on their heads. Jessica definitely qualifies as a smart person who disagrees with me.

Were there moments, then, Jessica, when he wanted to bounce you on your head?

CHASTAIN I don’t think so. There was one time I wanted to bounce him on his head. For months before we started filming, there was a lot of back and forth and a lot of disagreements about the exact color my hair would be in the film. I was leaning more toward browns and blacks, and he likes the color of my hair, the reds. And then we’re on set and someone’s holding a poker chip, and he goes, “Is that poker chip pink? Because I’m color b…”

And then he stopped, because he knew that I was listening. After months of talking about the red tints in my hair, that was one time I wanted to lovingly bounce him on his head.

SORKIN Actually, I can’t ever remember being on a set where there was less tension. And a disagreement would generally have a comic aspect to it.

CHASTAIN And a musical finale, for sure. Whenever someone would say something that was from a musical or a song, we would break into the song.

Did you know that in China, where Jessica has to go often, because she moonlights as the spokesmodel for Piaget…

SORKIN I will say model, because in China they have bestowed upon her the title of Model Lady Worker.

CHASTAIN No, that is not correct. It’s Lady Model Worker. And you’re using model in a different definition than what it means. I’m the model of a good worker…

SORKIN Yes! That’s why the words that I said are in the right order! “Lady Model Worker” means that you’re a female model. It sounds like you’re an escort.

CHASTAIN No it doesn’t! Not in China.

SORKIN “Model Lady Worker” means that you are an example, an icon of a lady worker.

Also Read: Jessica Chastain: Can Robin Wright Just Be the Lead of 'House of Cards' Now?

CHASTAIN Do you speak Chinese?

SORKIN I do not.

CHASTAIN Then maybe you’re not the one to talk about this subject. Lady Model Worker is a great honor, and I will not have you disparaging my nickname any further.

SORKIN I don’t know how we got there. Sorry.

CHASTAIN Did we answer any of your questions at all, or did you just listen to a two-person therapy scene?

How does his directorial debut, ”Molly’s Game,“ stack up against classics like ”A Few Good Men“ and ”The Social Network“?