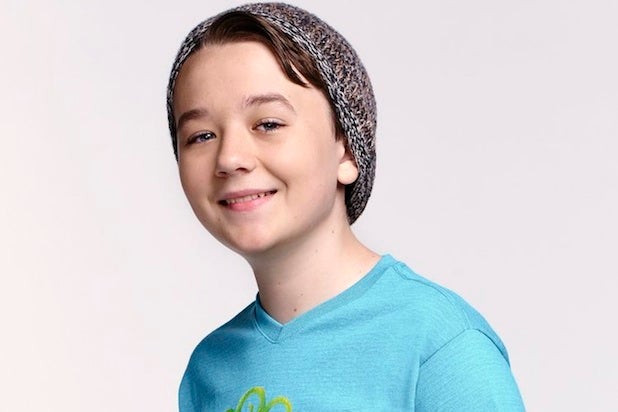 Fox’s “Sons of Tucson” was cancelled after just four episodes in 2010. And NBC decided not to renew White House family comedy “1600 Penn” after its first season ended in early 2013. So Stockham knows how hard it is to make it to a second season and isn’t taking his current series, NBC’s “About a Boy,” for granted.

“It is really, really great being on a second season,” Stockham told TheWrap. “With the first season, you’re always a little bit worried that it might not happen. But when it does, it’s just spectacular. And it’s different from the first season, because you feel like you’ve already known these people for a while.”

Stockham stars as Marcus, the titular “boy” on the NBC comedy co-starring Oscar nominee and Emmy winner Minnie Driver as hippy-dippy mom Fiona and David Walton as his adult best friend, Will.

As Stockham is shooting the eighth episode of Season 2, TheWrap spoke with the young actor about the increased confidence a sophomore season of “About a Boy” gives him, the best acting advice he’s received from his co-stars and what other projects he has in the works.

TheWrap: With the comfort of knowing each other better, are you able to improv a bit more with your lines?
Benjamin Stockham: I suppose that is possible, but I try not to mess with the lines too much. I try to keep them along the same lines, because I don’t want to offend the writers or anything.

What would you call the most important storyline of the first set of episodes?
Will gets a check for a measly amount of money, so he returns to San Francisco to see what’s wrong. In the end, he makes the hard decision to sell his house to get his money back. He hasn’t sold it yet and he’s thinking about it. And, we find out who claims to have co-wrote ‘Runaway Sleigh’ a little later in the season.

Your character is sort of the underdog. What kind of wins will we see for him this season?
Well, Marcus has a crush and she doesn’t hate him immediately, so that’s a win for Marcus. And Marcus gets to play Romeo in a play. That sort of doesn’t work out, but it’s still a win.

What do you think you’ve learned the most from Minnie Driver and David Walton?
In acting, you can always grow and get better – even if you think you’re at your limit. And I think that both David and Minnie Driver both have really taught me about timing. For comedy, timing is key. And, I used to be pretty speedy but it’s always funnier if you just wait a little then say it. They’ve both taught me a fair bit.

On Tuesday’s episode, Will is selling his house and there’s a sort of contest for Marcus, right?
Will doesn’t want to leave Marcus all alone in San Francisco when he sets out, so he hosts a competition to see who can be a good friend for Marcus. I won’t tell you who wins, because it’s super unexpected. It’s something to look forward to. It’s kind of like ‘The Dating Game,’ except for friends.

What else are you working on?
I have a Dreamworks animation [movie] nearly done and it’s going to premiere in 2015. It’s the “Bureau of Otherworldly Operations.” It’s going to be so cool. During the hiatus, I’m going to go over to Dreamworks and record with my silky smooth voice.

What advice would you give for voice acting?
That’s an interesting question, because I’m fairly new to voice acting. My best advice would be to inject as much emotion into your words as possible, because you can’t rely on facial expressions to get the point across.

Also read: NBC’s ‘Parenthood,’ ‘About a Boy’ Crossover to Be One-and-Done Each … This Season at Least

You also have a film called “Lost & Found”? What’s that about?
Yes, I finished shooting that pretty recently. Here’s what it’s mainly about in one word: family. Mark Walton and Andy Walton get sent to an island. It’s sort of like a treasure-hunting movie, but you find out all along that the treasure is love and family. And that’s beautiful, but also there’s still treasure. Basically, it’s about the developing relationship between brother and bigger brother and how they care for each other even though they bicker with one another time and time again. It’s beautiful. I don’t want to give away the big secret, because there’s a giant secret.