You may recall the buzz out of Cannes that followed the movie “Aline,” a film deemed campy and wild by some critics as an unofficial biopic of Celine Dion — but also for a scene in which the film’s 57-year-old star at one point portrayed Dion at age 12.

The first English-language trailer for that film actually shows a quick shot of that bizarre scene, and it even proudly declares that it is a “fiction freely inspired by the life of Celine Dion.” In fact, Lemercier plays Dion between the ages of 5 to 50, according to the film’s logline.

The scene in the trailer comes as a record producer asks the “young” singer if she’s actually singing on a tape, only for her mom to correct the man and explain that her name’s not “Celine” but “Aline.” 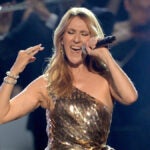 Her full name by the way is Aline Dieu, which translates to “Aline God” in English. And the film takes audiences through the famed singer’s musical journey, including exploring her romantic relationship with a manager who’s decades older than her.

Perhaps even more perplexing is that the film’s trailer quotes New York Times writer Kyle Buchanan’s tweet out of Cannes, in which he says that “you have not lived until you’ve seen this,” though the trailer conveniently cuts off the part where he mentions it’s because “this 57-year-old actress-director shrink herself down to Hobbit size to play a pre-teen.”

Check out the “Aline” trailer above.