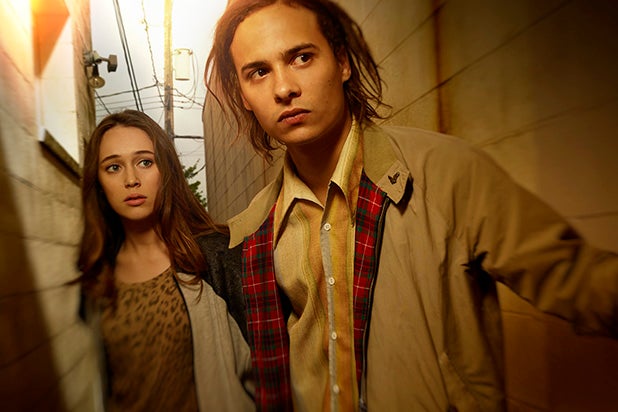 Alycia Debnam-Carey broke out playing a badass warlord on The CW’s post-apocalyptic drama “The 100,” but she’ll be facing dangers much closer to our current reality as one of the leads on AMC’s “Fear the Walking Dead.”

“I love that sort of sci-fi, fantasy world, so [‘The 100’] was a real treat to play,” the actress told TheWrap. “But [‘Fear the Walking Dead’] is very close to home, and this is all about family dynamics, character relationships, and I also love that. And this world, as normal as it is, is about to get very abnormal, so it’s also a little extreme.”

“Fear” is a companion spinoff series to AMC’s massively successful “The Walking Dead,” which followed characters as they do anything they have to to survive in a world overrun by zombies.

At the beginning of the pilot, high school student Alicia, like many teenagers, has big plans for getting out of town and getting away from her family, but everything unravels around her unravels quickly, even as her own family drama grows more intense.

Below, Debnam-Carey talks about her character’s skepticism, odds of surviving in a zombie apocalypse, and what it was like going back to a pre-apocalypse world after playing a post-apocalyptic warrior.

You came to “Fear the Walking Dead” directly off of “The 100.” What was it like going from that to playing such a normal girl?
It was super weird, it was like “I have no power anymore! No weapons, no power!” But maybe eventually, Alica will be able to have her own kind of power. But yeah, it was a very dramatic shift. I’d never played a character like Lexa before, with such an iconic look and distinct wardrobe, in a different world. I love that sort of sci-fi, fantasy world, so that was a real treat to play. But this is very close to home, and this is all about family dynamics, character relationships, and I also love that. And this world, as normal as it is, is about to get very abnormal, so it’s also a little extreme.

So, Alicia starts off very skeptical about the things that are happening around her…
Yeah, as most people would do in a situation like that, you try to justify everything. You try to rationalize it, make logic out of something absurd. She is kept in the dark more than everyone else. Everyone tries to keep her sheltered a little bit more. They like the idea that maybe this is temporary or it can be fixed, we don’t know that much yet, the stakes are really high but it could be worked out.

When will we see her start to accept the reality of the situation?
In time, definitely over the season. It’s a slow burn. It’s very different from the original show, where you were thrust into this world immediately. In this, the infected look like regular people, you don’t know what they’re capable of. Everyone thinks it’s drugs, or a phase or something. She’s going to fall hard and fast. She starts off with quite a lot of hope. She’s going to get out of town, she’s got a boyfriend, she’s got a plan. And then very quickly, she’s left with nothing. So that was also very interesting. It becomes her figuring out this world, and it will also coincide with her recognizing her place, within herself, and knowing then, what she’s going to do about it.

Also Read: Alycia Debnam-Carey on 'The 100' Return: a Lexa, Bellamy and Clarke Love Triangle 'Would Be Ferocious'

And when she does accept that the world has changed, what’s her reaction going to be?
Some characters will try to go on as normally as possible, whereas she gets quite sick of it very quickly. The world isn’t normal and we have to get used to it. She’s a smart girl. So I think she’ll do quite well in the apocalypse, actually, much better than I would do.

Do you think she has a better chance of survival than some of the other characters on the show?
I don’t know. It’s a weird position. These are normal people. Rick Grimes was a cop, he at least had some understanding of weapons and training. These people are students, teachers, members of the community. it’s very different. I think it’ll be an interesting journey to see what they’re willing to do. What they’ll choose morally, what they’ll invest in emotionally.

In the early episodes Alicia hasn’t had too many zombie encounters yet, but have you gotten to do some stunts with them?
I’ve done some stunts, got some bad bruises too! I can’t say too much, but you’ll see. Everyone got their fair share to do, that’s for sure.

Young up and coming actors getting cast in film and TV include “The Flash,” “Fear the Walking Dead” stars

Alycia Debnam-Carey, who played Mia on Season 3 of "Dance Academy," gained notice for The CW's "The 100" and is a lead on AMC's new drama "Fear the Walking Dead"