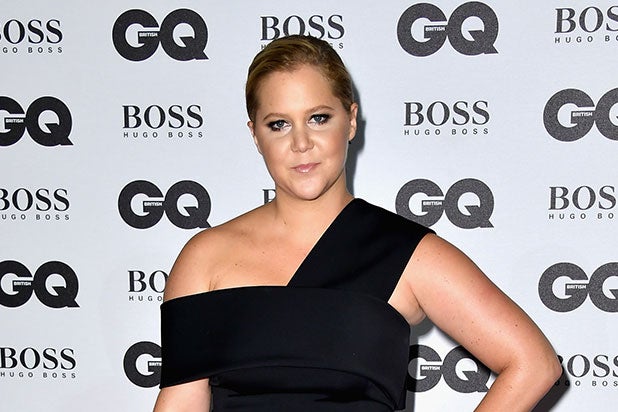 Amy Schumer says she has been “flat-out raped.”

Schumer told Katie Couric about her experience on Couric’s podcast as the two talked about women who have spoken out about sexual harassment and abuse.

“I’ve been flat-out raped,” the actress said. “But there are so many other kinds of sexual misconduct. We’ve all — every woman I know, every woman in this room — we’ve all had these experiences. In this current climate, it brings these things up and you go, ‘God, none of that was okay.'”

In a previous interview with NPR’s “Fresh Air,” Schumer said that every woman has “probably been a little bit raped.”

“I – most women I know, that I’m close to, have had a sexual experience that they were really uncomfortable with and that if it wasn’t completely rape, it was something very similar to rape,” she said. “And so I say it’s not all black and white. There’s a gray area of rape, and I call it grape. And it’s the guy you went home with in college, and you said no, and then he still did it. Or maybe you woke up, and it was somebody you were dating, and they were – you know, there’s just so many different things that can happen.”

And in a previous Marie Claire interview, the “Trainwreck” star said that her first sexual experience “was not a good one,” something she also talked about in her 2016 memoir, “The Girl with the Lower Back Tattoo.”

“I looked down and realized he was inside of me,” she told Marie Claire. “He was saying, ‘I’m so sorry’ and ‘I can’t believe I did this.'”

Schumer told Couric about the importance of women speaking out, and mentioned her friend Aziz Ansari, the subject of a recent article entitled, “I went on a date with Aziz Ansari. It turned into the worst night of my life.” Ansari said he believed everything that had happened between him and the woman was consensual.

“If you have a doctor that makes you uncomfortable, or you get a massage, or you have a date with someone and they coerce you in a situation like the Aziz [Ansari] one, I don’t think there’s any sort of criminal charge, but I think that it’s good for everybody to learn that that behavior’s not acceptable,” she said. “It’s not a crime, but it’s not cool. And it can still really mess with a woman. … We just can’t let things continue the way they’ve continued, because there are so many different levels of it.”

She continued, “I don’t think anyone wants to see Aziz’s career ruined or his life ruined or anything like that, but that’s where people’s minds go. They go, ‘Does he deserve this?’ And it’s really not about that. I think it’s about expressing and showing women that that behavior is not okay, and not only can you leave, but you need to leave. Because then the women who come after you — you’re leaving a mark for them too… He’s been my friend and I really feel for the woman. I identify with all the women in these situations. Even if it’s my friend, I don’t go, ‘Oh, but he’s a good guy.’ I think, ‘What would it feel like to have been her?'”