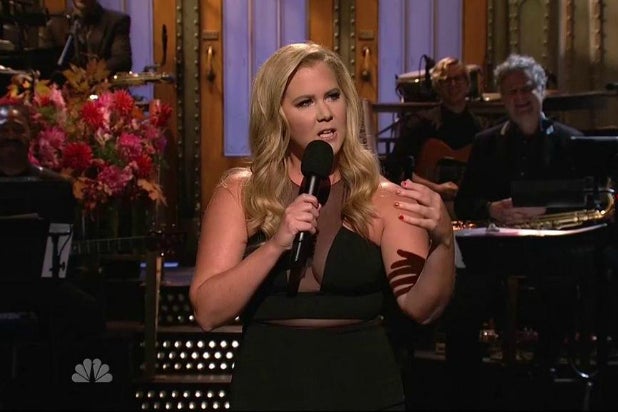 Amy Schumer had no problem using the word vagina several times in her very first opening monologue for “Saturday Night Live,” proving viewers were in for a female empowered night.

Rather than lean on the traditional singing opener of so many celebs past, Schumer took the opportunity to show off her standup chops ahead of her HBO special next week, taking on everyone from the Kardashians to Hillary Clinton and Bradley Cooper, slaying the crowd and the “SNL” band behind her. Most of all she slayed herself, referring to her body as a “lava lamp” and calling attention to her chubby cheeks with the self-deprecating humor her fans have come to love and expect.

She saved the singing for the night’s first sketch, an exuberant but weird bit featuring herself and Vanessa Bayer as Spice Girls-singing flight attendants who kept getting sucked out of the plane’s door. It was a bizarre if not lighter tone to set the pace after last week’s premiere, which seemed intent on proving “SNL’s” political relevance.

In fact most of the episode steered clear of any political sketches at all, save the recurring “Fox and Friends” opener and “Weekend Update,” which both took the opportunity to cover House Majority Leader Kevin McCarthy dropping out of the House speaker race two days prior. Even “Update” hosts Colin Jost and Michael Che went light on the issue, taking more time to tackle news like the ongoing gun control debate, Chuck E. Cheese’s new menu and Justin Bieber‘s baby-maker as they demonstrated their always-improving banter and chemistry together behind the desk.

The weakest moment of “Update” came via Jay Pharroh’s Travel Correspondent Solomon, a one-dimensional character with slurred speech who only served to drag down the pace. Kate McKinnon‘s Ms. Santini, a “neighbor” of Jost’s who voiced concern over New York’s overcrowding apartment situation, didn’t fare much better when she read a letter to another neighbor’s baby out loud. The best guest of the entire bit was musical guest The Weeknd himself, thanks to a quick, if not meta parody.

Schumer shone in an otherwise flat sketch revolving around a town hall meeting as a seven-year-old girl spouting her rights to bring a gun to school and calling for the elimination of “unnatural” gay marriage, but missed the mark as a Mary Lincoln portrayer who insisted on rewriting presidential history by improvising for the incoming tour groups.

Musical guest The Weeknd delivered low-key performances on a rather subdued stage, bringing out an surprisingly subtle Nicki Minaj for his rendition of “The Hills” and following up with radio hit “Can’t Feel My Face.”

True to Schumer’s female-empowerment vibe, the final sketch of the night took place at a shower featuring the host and all of the full-time female players. The bit missed an opportunity to play on the shower tropes and awkward situations so many women actually find themselves in, opting instead to showcase Schumer as the crazy friend who upends the party. It was an appropriate ending to an episode that made the most of its host, but failed to really stand out otherwise.