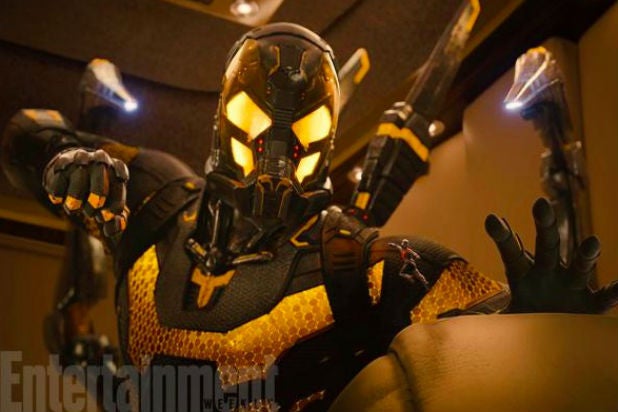 “Ant-Man” villain Yellowjacket may be small in stature but he isn’t lacking in sting.

The first-look poster of the black and yellow villain (a.k.a. Darren Cross) played by Corey Stoll was released on Thursday, and it shows that his suit comes fully-loaded.

“Hank Pym’s Ant-Man suit doesn’t have a single weapon, whereas Yellowjacket is armed with plasma cannons,” director Peyton Reed told EW in an official preview of the upcoming Marvel film.

Marvel released the first trailer for “Ant-Man,” which stars Paul Rudd as the insect-sized superhero and Michael Douglas as his mentor, earlier this year and the latest photo shows what they’ll be up against.

However, it is not as mismatched as fans may at first think. “Ant-Man is very fast when he’s small,” Reed said. “Also, when he shrinks, he increases his density, so he’s got increased strength.”

The Punisher (1989) - Marvel has had three cracks at getting a “Punisher” franchise going, and none really took off. Ivan Drago himself, Dolph Lundgren, was the first to don the skull t-shirt in 1989. The other two to play the violently vengeance-bent vigilante were Thomas Jane (2004) and Ray Stevenson (2008).
View In Gallery
x
Looks like you're enjoying reading