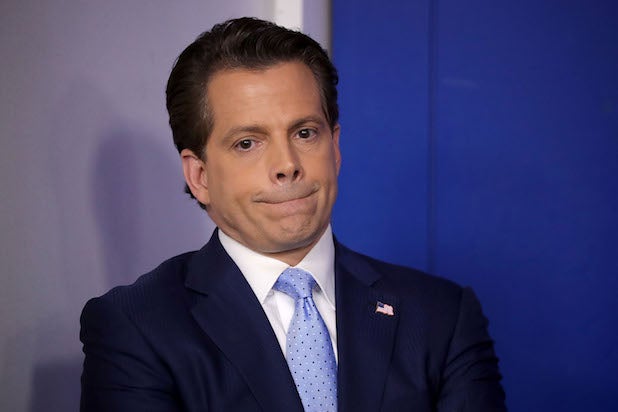 Anthony Scaramucci, the Trump White House’s short-lived communications director and fledgling media publisher, found himself embroiled in yet another controversy of his own making on Monday after threatening to sue a college student over an editorial in the Tufts University student newspaper.

On Monday, The Tufts Daily, published a lawyer’s letter it received from the firm of Sadis & Goldberg LLP, alleging that recent commentary pieces by graduate student op-ed writer Camilo Caballero amounted to defamation of Scaramucci.

According to the letter, Scaramucci took particularly issue with Caballero’s claims that the former hedge funder and Tufts graduate was “an unethical opportunist” who “exuded the highest degree of disreputability.”

The letter prompted the university to postpone a planned event with Scaramucci Monday evening for students of the school’s Fletcher School of Law and Diplomacy, where Scaramucci serves as a member of the Board of Advisors.

“We’re disappointed that Mr. Scaramucci has taken this action. The university has been working to facilitate a conversation that had been scheduled for Monday evening between Fletcher School students and Mr. Scaramucci about his background, experience and the petition calling for his removal from the Fletcher School Board of Advisors,” a university spokesperson told TheWrap. “In light of recent developments, we are postponing the event until these pending legal matters are resolved.”

The story lit up the peanut gallery on Twitter Sunday evening.

“Very Trumpian of @Scaramucci to threaten to sue a student for hurting his feelings and then whine when the university cools to the idea of him hanging around,” said MSNBC’s Joy Reid.

And it went from there.

Very Trumpian of @Scaramucci to threaten to sue a student for hurting his feelings and then whine when the university cools to the idea of him hanging around. https://t.co/PQSGn8ueP2

You know, for someone who says he wants an open debate, @Scaramucci sure excels at finding ways to act against that stated claim. https://t.co/C2AzLmeYcZ

Shame on @Scaramucci for threatening to sue his alma mater @TuftsUniversity paper for unflattering coverage. Ask to correct the record if you must, but don't menace student mediahttps://t.co/9pfCJdDAqA

Like Trump, @Scaramucci threatened to sue someone without a legitimate legal basis to do so. Unlike Trump, Scaramucci went to law school and should know better. https://t.co/i6ojsSBHVc

What is @Scaramucci up to? Oh, not much, just hiring expensive lawyers to threaten Tufts students with defamation pic.twitter.com/17tWIIB8rv

The @Scaramucci defamation threats are frivolous thuggery from an unserious person and an unscrupulous attorney.

And in our era of Trumpian counter-punching, they were not ones the pugilistic former communications director could pass up responding to.

Daniel I was ready to come to the school, that’s an open debate. Nobody is going to call my ethics into question without a fight. An apology will suffice. https://t.co/XWx0Q8XP6r

I didn’t realize you were still alive? What happened to your career? https://t.co/Dtongs4v0L

That is what I did. All I need is an apology and correction. Get the facts right. Defamation is not unflattering coverage. It’s defamation. https://t.co/EKLLAecTKh

Showing your politics Joy and your typical superficiality. https://t.co/d8fLlZDNIf

This is a dishonest tweet. I asked for an apology. Plain and simple. In our country defamation comes with its consequences. https://t.co/Cs64CtrV86

You are entitled to your opinion but don’t politicize defamation. https://t.co/m9RbtO2tPE

Scaramucci did not immediately respond to request for comment from TheWrap.