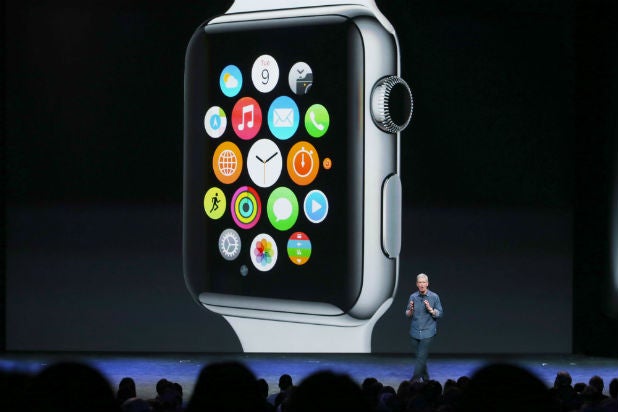 After closing at $98.36 on Monday, the tech giant’s stock rose to $102 a share upon Tuesday’s announcement of the iPhone 6 and the Apple Pay system that’ll allow consumers to store credit card information to their phones. CEO Tim Cook called Apple Pay “an entirely new payments solution.” The feature will work with the American Express, MasterCard and Visa, as well as with bank issuers that handle 83 percent of the credit card purchase volume.

But when investors learned that they wouldn’t be getting their coveted Apple Watch until well after Christmas, the stock dipped to a three-week low of $96.65. Apple watchers also expressed disappointment that the watch would only function with iPhones.

Apple’s stock ultimately closed at $98 on Tuesday, holding steady near the $100 benchmark. The company’s stock has historically gained 0.3 percent on the first day following iPhone announcements.

Cook called the Apple Watch “the most personal device we’ve ever created,” and noted that it will include features such as the Siri app and a Maps app that offers turn-by-turn directions. The watch will start at $349.