Weaver is marking her second stint as "SNL" host. She will be joined by musical guest The Ting Tings. 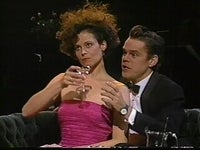 January is turning into Old School Month on "SNL."

As TheWrap reported earlier, Charles Barkley has been booked to host the first episode of "SNL" in 2010. Barkley’s last visit the NBC sketch show was in 1993, when Nirvana was his musical guest.

The gap between Weaver’s "SNL" hosting gigs is even longer. She last hosted 24 years ago, in 1986, on an episode that featured visits from the Church Lady and Mr. Subliminal. She welcomed musical guest Buster Poindexter (!) and surprise guest Madonna.

Some things don’t change, however. Back then, Weaver was promoting a little James Cameron movie called "Aliens." Now, of course, it’s "Avatar."