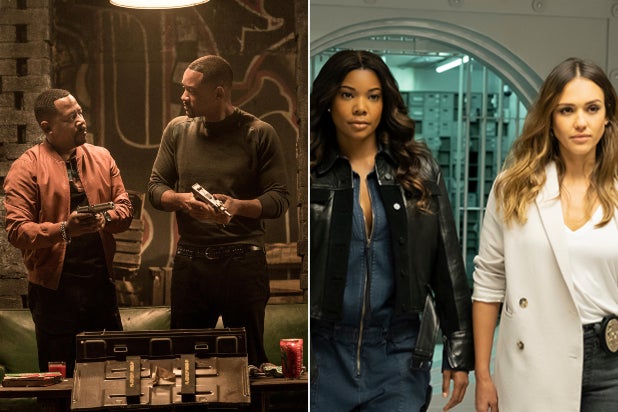 (Warning: Light spoilers for “Bad Boys for Life” below)

It looks like we’ll have to wait for “Bad Boys 4” for the Bad Boys Cinematic Universe to come to fruition.

“Bad Boys for Life,” the long-awaited third film the Will Smith-Martin Lawrence action franchise, hit theaters this weekend. One of the characters from the previous film, Gabrielle Union’s Sydney “Syd” Burnett, doesn’t appear.

Normally, a supporting character not returning for the follow-up film wouldn’t be a big deal — and it certainly wasn’t for film-goers, as the movie brought in $68 million over the 4-day holiday weekend. But with Union starring on “L.A.’s Finest,” a spinoff of the franchise that airs on Spectrum Originals, was there an opportunity missed on giving the series a nice publicity bump ahead of its second season later this year?

For those that don’t recall, Syd is the kid sister of Lawrence’s Marcus Burnett who was also romantically involved with Smith’s Mike Lowrey. However, aside from a brief mention of her former relationship with Lowrey in “Bad Boys for Life,” Syd is not involved in the film’s storyline. Those involved with the film and the TV show told TheWrap that, while there was interest in bringing in Union and her co-star Jessica Alba, it just wasn’t going to work out logistically.

“There were talks, because Jerry Bruckheimer and Doug Belgrad, who produce the movie, also produce ‘LA’s Finest.’ It honestly was logistics,” Katherine Pope, head of originals for Spectrum Originals, said. “When we picked up ‘L.A.’s Finest,’ ‘Bad Boys’ was already, I think, it was days away from shooting. So it was all so last minute and we tried to make it work and just logistically we couldn’t.”

For their part, the film’s directors Bilall Fallah and Adil El Arbi said that there was no way to work in Syd into the story without it feeling bloated. “There was some talk about it, but the thing is, at the end of the day the story was so tight basically that there was no real room for it [that storyline], the duo said. “We probably would have ended up having to cut it, and we didn’t want to do that. So, eventually we just decided to focus on the main story.”

“L.A’s Finest” sees Syd transfer from Miami, where “Bad Boys” is set, to Los Angeles to join the LAPD, where she teams with Alba’s Nancy McKenna. When we asked Pope if Season 2 of “L.A.’s Finest” would at least try to include some kind of tie-in with “Bad Boys for Life,” she said that logistical separation makes it difficult. “It’s easier for when Will and Martin are talking, to talk about Martin’s sister, than it is for Gabrielle to talk to some person who hasn’t met her brother about him.”

But, with reports of a fourth film being planned in the “Bad Boys” franchise, with Chris Bremmer attached to write a script, Pope is holding out hope for that elusive crossover. Fallah and Adil El Arbi, told TheWrap that they’ve talked about doing a fourth film: “At this point it’s more of if the audience wants it, we are more than ready to make a fourth one, and I think there is still a story to tell,”

“We are all, I think Doug and Jerry and that whole crowd, we all are like, ‘Oh it will happen,'” Pope said. “We’ll have more time to plan.”