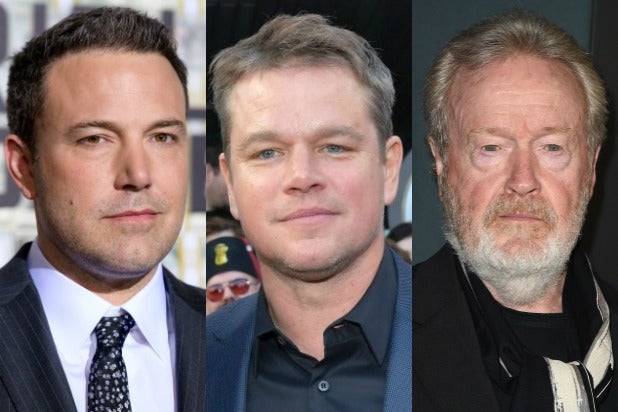 Ben Affleck and Matt Damon are reuniting on-screen in “The Last Duel,” which is based on Eric Jager’s book “The Last Duel: A True Story of Crime, Scandal and Trial by Combat in Medieval France.” Ridley Scott will direct.

Damon and Affleck are writing the script with “Can You Ever Forgive Me?” screenwriter Nicole Holofcener, for which she was nominated for an Oscar.

Scott last directed Damon in “The Martian.” His most recent credits include “Alien: Covenant” and “All the Money in the World.” Scott is represented by WME and Slate PR.

Damon and Affleck starred together in “Good Will Hunting,” which also featured Stellan Skarsgard and Casey Affleck, and was directed by Gus Van Sant. Damon’s most recent credits include “Suburbicon” and “Downsizing.” He is represented by Viewpoint and WME.

Affleck most recently starred in “Triple Frontier” and “Justice League.” He is represented by WME and Sunshine Sachs.

Holofcener’s other credits include “Every Secret Thing” and “Enough Said.” She is represented by UTA.