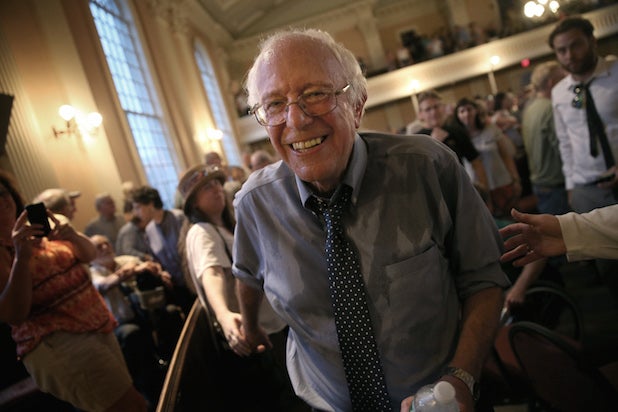 It used to be that you couldn’t find too many Hollywood celebrities who were willing to go on the record as Bernie Sanders supporters. Even as Hillary Clinton’s numbers were sliding amid news reports that she used a private email server during her years as secretary of state, Hollywood remained squarely in Clinton’s camp.

But these days more and more A-list names are publicly coming out in support of the Vermont senator, something unfathomable just a few months ago.

“I witnessed 20,000 people screaming for this guy at the L.A. Sports Arena and he wasn’t even wearing leather pants,” The Doors drummer John Densmore told TheWrap. “Here was a 73-year-old disheveled Vermont independent senator packing up a stadium. I knew something was happening.”

Densmore was so impressed, he recently turned the first U.S. public screening of his film about corporate greed, “Window of Opportunity,” into a Sanders fundraiser.

“Bernie kept the donations to $15, which is the way he does it,” Densmore said. “We got 500 people and they responded very strongly.”

Earlier this month, Sanders got a noteworthy endorsement from one of Hollywood’s biggest stars when actor Ryan Gosling tweeted out a link to a video showing Sanders speaking about racism.

“For my birthday… Could you do me a solid and pass this around?” Gosling asked his his nearly 2 million followers.

For my birthday… Could you do me a solid and pass this around? https://t.co/EByak8o1Vi

Gosling’s shout-out was retweeted more than 4,600 times with another 5,000 people hitting the like button.

Those who support Sanders say he seems to have struck a chord with Hollywood millennials, attracted to his progressive ideology and increasingly frustrated with Washington gridlock and growing income inequality.

“Hillary is a formidable and smart candidate and she definitely enjoys the support of older people in Hollywood,” said “Mom” star and Sanders fundraiser Mimi Kennedy. “But Bernie speaks to the younger generation of actors. They want Bernie.”

A quick look through Sanders’ list of Hollywood backers suggests Kennedy may have a point. “X-Men: The Last Stand” star Ben Foster and his actor-musician brother Jon are both #FeelingtheBern.

The senator’s roster also includes an eclectic mix of musicians and DJs, most of whom are unfamiliar to anyone over the age of 40.

But while many of Sanders’ younger followers add valuable hipster cred to the 74-year-old’s campaign — not to mention a healthy social media following — their fans tend to be far less politically active and nowhere near as wealthy as Clinton’s backers.

To be fair, Sanders has more than a few A-list Hollywood veterans with deep pockets in his corner, including Will Ferrell, Mark Ruffalo, Danny DeVito, the Red Hot Chili Peppers, rapper Killer Mike, Margaret Cho, Susan Sarandon and co-founder of Apple Steve Wozniak.

Comedian Sarah Silverman, one of the first to jump on the Sanders bandwagon, introduced the presidential hopeful before a crowd of 27,000 people at the Los Angeles Sports Arena in August, while “Family Guy” creato introduced him during another fundraiser in Hollywood in October, along with a ringing endorsement.

“Doesn’t it seem that things have swung so far in one direction that just a little bit of Democratic Socialism maybe is not the worst idea?” McFarland said about Sanders.

But Clinton’s list of Hollywood donors arguably eclipses all other candidates combined and is longer than a “Lord of the Rings” marathon on TBS.

According to numbers released at the end of the last quarter, Clinton won the fundraising race by a landslide, collecting nearly $98 million. During that same time, Sanders raised less than half that amount, with only $134,000 coming from Hollywood.

A recent L.A Times report showed $9 out of every $10 donated by Hollywood has ended up in Clinton’s coffers.

About 301,154 women donated to the Sanders campaign, as of the last reporting period at the end of September, according to his campaign. That’s compared to the 240,000 women who have given money to Clinton since she launched her campaign.

“More and more people in Hollywood are realizing that Bernie Sanders is speaking about what people want in this country,” actor Jonathan Sadowski (“Young and Hungry”) told TheWrap. “There are just as many celebrities backing Bernie Sanders [as there are backing Clinton]. If you look on his website you’ll find a list of those who’ve publicly endorsed him and it’s a rather extensive list with some big hitters.”

Sadowski says that’s because Sanders speaks from the heart and is not in it for personal gain.

“He’s a person who’s really trying to bring change to the country. He’s not taking any corporate money.”

A Quinnipiac University poll released on Wednesday shows that while Clinton leads among Iowa Democrats, likely caucus-goers believe Sanders is the best candidate for the economy.

About 47 of the Democrats polled said Sanders would best handle the economy, while 42 percent said they believed Clinton would.

“He has a very good shot,” Sadowski said. It’s still a year out so we’re still pretty far away.”

Other Hollywood Democrats say that while they support Sanders, what they would really want to see is a combined ticket.

“My hope is that Bernie and Hillary run together, to present a united front against bigotry and ignorance, which is all I see from the right,” Margaret Cho told TheWrap. “I support both of them. We need everything we can get right now.”