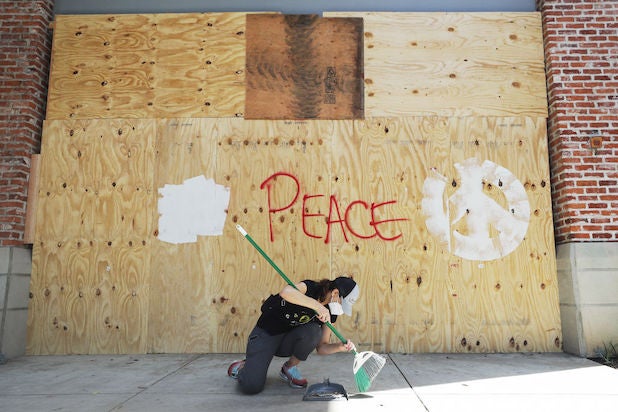 A volunteer cleans in front of a shop window boarded up a day after looting occurred amid protests on June 1 in Santa Monica. (Photo by Mario Tama/Getty Images)

Santa Monica’s Big Blue Bus will run on a regular weekday schedule and will remain in service even after the 6 p.m. curfew until the end of its regularly scheduled service. Downtown parking structures will be closed after 6 p.m. and ridesharing services will also be suspended at that time.

The curfews, which have occurred every night this week, are in response to vandalism and looting that has occurred amid ongoing protests sparked by the killing of George Floyd. Though many protests have been peaceful, police have frequently clashed violently with protesters and have made hundreds of arrests throughout the county.