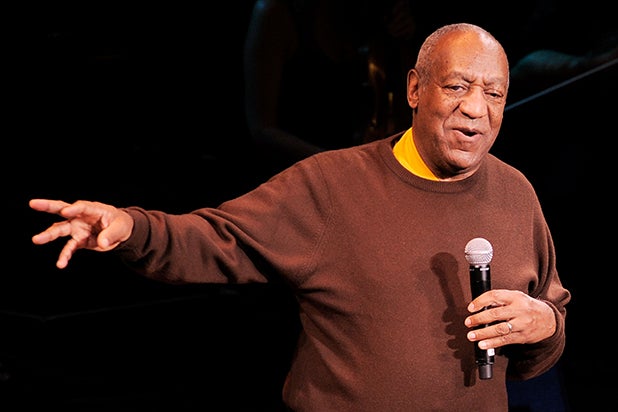 About 100 protesters chanted “Rape is not a joke!” and “No means no!” outside a Denver theater right before Bill Cosby took the stage on Saturday, according to the Associated Press.

The demonstration came shortly after another woman, a former model named Beth Ferrier, came forward claiming the embattled comedian sexually assaulted her in 1986.

“I cannot tell you how horrific of a feeling that is,” Ferrier told reporters.

Ferrier made the claim during a Denver news conference, called by Los Angeles attorney Gloria Allred. She said Cosby put drugs in her coffee when she went to see one of his shows. The next thing she remembered was waking up hours later in the back of her car “practically naked.”

Ferrier, 55, has said previously she was assaulted by Cosby. She went public in 2005, alleging that in the early 1980s, she met Cosby and they had a brief affair.

Cosby’s attorney, Martin Singer, has not yet responded to TheWrap‘s request for comment. However, in the wake of the mounting allegations against 77-year-old Cosby, Singer released a statement saying: “The new, never-before-heard claims from women who have come forward in the past two weeks with unsubstantiated, fantastical stories about things they say occurred 30, 40, or even 50 years ago have escalated far past the point of absurdity.”

See video: Bill Cosby Gets Heckled: ‘You Are a Rapist!’

More than 20 women have come forward claiming the comedian either drugged them, sexually assaulted them, or both.

On Friday, Cosby performed in front of a sold-out audience in Pueblo, Colorado, where demonstrators gathered outside chanting “Colorado believes the women.”

But, inside the venue, the audience was anything but hostile.

Also Read: Vivica A. Fox Defends Bill Cosby: He Was ‘Nothing Like the Man They’re Describing’ (Video)

Earlier in the week, Cosby released a statement thanking his fans ahead of his Colorado performances.

“I have thousands of loyal, patient and courageous fans that are going to leave their homes to enjoy an evening of laughter and return home feeling wonderful,” he said. “I’m ready!” adding, “Hey, Hey, Hey — I’m Far From Finished,” a references to his “Fat Albert” character’s trademark line.

Besides the Denver shows, Cosby will also perform in back-to-back shows at the Wilbur Theatre in Boston, Massachusetts, on Feb. 6.