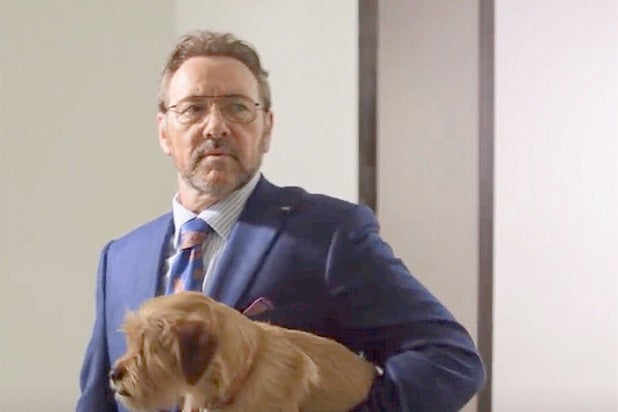 Across his sporadic and meager filmography, director James Cox has showcased an affinity for the quintessential bad boy in stories laced with toxic testosterone, heavy drug use and gruesome violence. Cox seems to revel in tales about young white men whose reckless ambition pushes them to commit unthinkable crimes and betray their buddies. Even if the results are catastrophic, he somehow portrays their acts not as malicious and reprehensible, but as commendable endeavors gone wrong.

This questionable bro-bravado in ingrained in 2002’s “Highway” (starring baby-faced Jared Leto and Jake Gyllenhaal), his 2003 John Holmes crime drama “Wonderland,” with Val Kilmer as the lead, and the more recent  “Straight A’s,” with Ryan Phillippe and Anna Paquin. For his latest, “Billionaire Boys Club,” Cox enlists rising stars like Ansel Elgort, Emma Roberts and Taron Egerton as well as a veteran (Kevin Spacey) who up until recently could have served as a prestigious hook for the enterprise.

On paper, this new film iteration of the famous real-life case  — previously put on screen as a two-part TV movie back in 1987 — surely appeared to have been a low-risk investment with high chances for profit. But those hopes have vanished with this hapless finished film — and not entirely due to Spacey’s recent #MeToo troubles. (The film debuted on iTunes and other streaming platforms this week in advance of a limited theatrical release planned for next month.)

Set in the early ’80s, “Billionaire Boys Club” is narrated by Egerton’s Dean Karny, one of the key figures in an operation that would eventually turn greedy kids from modest backgrounds into cold-blooded killers. A graduate of L.A.’s exclusive all-male Harvard School, Karny is making moves toward his goal of being rich by selling imported cars to affluent guys his age — children of Beverly Hills royalty. During one of those deals he serendipitously runs into old classmate Joe Hunt (Elgort), a nerd with a knack for commodity trading. (Judd Nelson, who played Joe Hunt in the 1987 TV film, cameos as Joe’s father.)

Fancying themselves the Young Turks of their generation, Karny and Hunt begin luring gullible and moneyed white dudes to invest in gold. The pair promises a 50 percent return, even when the reality is less than favorable for their stocks. “Being rich is about respect,” says Karny, and their reputation grows quickly based not on tangible accomplishments but on the elaborate fantasy of success that they construct.

Hotshot entrepreneur Ron Levin (Spacey) shows interest in the operation — and soon becomes their mentor and fairy godfather. Overnight, Joe and Dean’s company, BBC (at first named to mock the Bombay Bicycle Club), turns them into monarchs of their own destiny. Worshiping at the altar of self-interest, their reign is short-lived. Tricked by a seasoned con artist, Joe gets caught up in his unstable web of lies, while Dean snorts his life away to cope with the impending implosion. Though the true-crime plot may sound appealing, it all plays out as a convoluted cluster of  platitudes grotesquely overflowing with cheap Los Angeles tropes.

Every character speaks in grand statements full of pseudo-insightful ideas about the self-made man and the nature of success. Imagine a coaching class one of the characters in “Entourage” might attend. There is much discussion of the “Paradox Philosophy,” which Joe brings up to justify his unorthodox approach to business.

The dialogue, by Cox and Captain Mauzner (“Factory Girl”), is almost entirely comprised of silly proverbs such as “The truth is the best lie” or “The perception of reality is more real than reality itself,” most delivered by Spacey.

The Oscar winner delivers the least insufferable performance in a film where acting quality erodes just as quickly as the characters’ moral compass. As in his previous films, Cox has managed to recruit great actors only to elicit bafflingly melodramatic and stilted work. Emma Roberts, as an aspiring artist and the only female character with more than a couple speaking lines, is particularly wasted.

Worse is Cary Elwes’ laughable and distasteful portrayal of Andy Warhol, whose presence can only be explained by the director’s need to expand his vision of early ’80s elitism.

Cox’s film plays like a pureed mash-up of “The Wolf of Wall Street,” “The Social Network” and last month’s indie heist film “American Animals” — without the richness or texture of any of those films. Despite some ineffectively colored flashbacks, the film is at least handsomely shot.