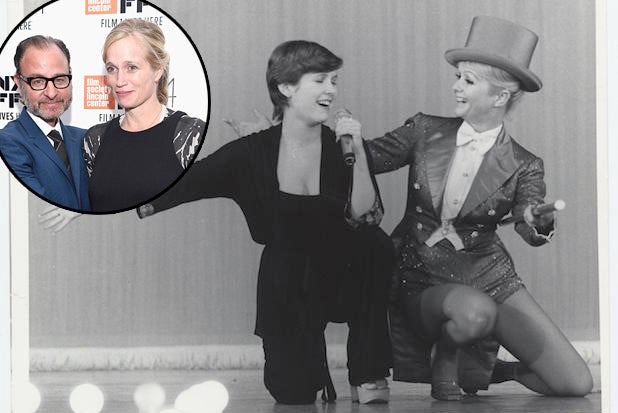 Fisher Stevens and Alexis Bloom spent about 18 months, on and off, with Carrie Fisher and her mother Debbie Reynolds for their HBO documentary “Bright Lights.”

The last visit came in November, just a month before the two died a day apart in December, shocking and devastating Hollywood.

“I saw Carrie and Debbie on November 19th, when Carrie had her 60th birthday party,” Stevens told TheWrap of the last time he saw the mother-daughter duo. “Debbie actually came up to Carrie’s house and was doing pretty well, and seemed in good spirits. Carrie was in great spirits with all her friends. It wasn’t very long ago.”

“We spoke to Todd [Fisher, Carrie’s brother and Debbie’s son] after Carrie was hospitalized,” Bloom added. “We could hear Debbie in the background and we could speak to Debbie. She wished us a Merry Christmas.”

Perhaps more than anyone, Bloom and Fisher had a hard time grasping the extraordinary circumstances of Fisher’s and Reynolds’ deaths.

“Intellectually, one could understand why a mother would not want to bury her child, and would pass away relatively soon after a daughter. You can understand that; it’s not an entirely surprising development intellectually,” Bloom said. “But emotionally, it’s flooring, and we were just shocked and devastated. We didn’t see it coming at all. It feels like people we love just stepped out of a room and then they were gone.”

“The fact that we were making this film and Debbie started to get ill, that kind of guided the narrative of our film toward the end,” Fisher added. “It was just so unexpected that this would be the outcome, the ending. We were devastated.”

The directors said they didn’t change anything in their film following the actresses’ deaths. They spent roughly 18 months filming the mother-daughter next door neighbors beginning in April 2014, and both Fisher and Reynolds watched and supported the film — eventually.

“They both saw it; they both liked it,” Bloom said. “It wasn’t easy for them at first. Particularly not for Carrie. She came round to it, I think she was initially surprised by how intimate it was. She hadn’t really gone there in her mind [about] ‘what is this film going to look like?’ So when she was saw it, she was like, ‘oh my goodness, I can’t believe it. It’s a real, long film about us and it’s really intimate.’ She was taken aback by it. But, to her credit, she came around. She had her feelings about it, she was emotional about it, we had a lot of back and forth… They didn’t have final cut, we did, but we collaborated with them on things that made them truly uncomfortable. There were a few minor cosmetic things, nothing that changed the narrative of the film.”

Despite having hours of unused footage from the long process of shooting with the two stars, the filmmakers also shot down the idea of releasing more footage from their time together, perhaps for another film.

“I don’t think so,” Bloom said. “We said what we wanted to say. They said what they wanted to say… We’d be concerned about being seen as exploitative if we did another sequel.”

“This was the film that we had blessings from both of them,” added Fisher. “They blessed this film.”