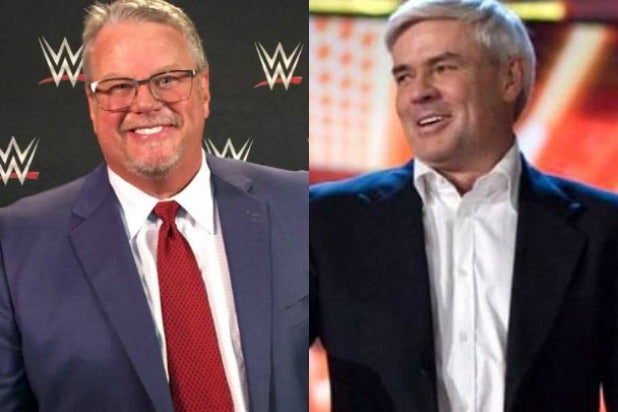 Prichard will report directly to WWE Chairman & CEO Vince McMahon. As executive director of “SmackDown,” Prichard will “oversee the creative development of ‘Friday Night SmackDown’ on Fox and ensure integration across all platforms and lines of business,” in WWE’s words.

Bischoff was promoted to executive director of “SmackDown,” then a USA Network series, in late June. At the same time, WWE upped Paul Heyman to the same role on Monday show “Raw.”

WWE did not elaborate on the reasoning behind Bischoff being fired.

A second person with knowledge of Bischoff’s ousting told TheWrap: “He just could not get the job done.”

TheWrap attempted to contact Bischoff via his cell phone for comment on this story but did not immediately hear back.

A few hours after the news came out, Bischoff posted the following to Twitter: “Bruce is a great producer, good friend and I am certain he is going to thrive in his position. He’s going to be working with a great team of the most dedicated and hard working people I have had the pleasure of working with and getting to know.”

Last month, WWE shook up its creative teams, sending longtime “Raw” writer Ed Koskey to “SmackDown,” where he replaced Ryan Ward, among other moves. At the time, a person with knowledge of the situation told TheWrap the reorg was to fix lingering “SmackDown” creative problems ahead of its highly publicized — and pricey — move to Fox’s broadcast channel.

Some recent behind-the-scenes flubs that we were told about included a highly touted new “SmackDown” writer getting caught asleep on his first day on the road by longtime WWE producer Michael P.S. Hayes, as well as a glaringly illogical ending to a storyline between Erick Rowan and Roman Reigns.

Below is Prichard’s WWE bio.

Prichard brings nearly 40 years of experience in sports entertainment with an extensive background in character development and creative storytelling. Over the course of his career, Prichard has served in a variety of roles including announcer, producer, agent and on-screen personality. Earlier this year, Prichard returned to WWE as a member of the company’s creative team.

Prichard is probably best known to casual wrestling fans for his on-camera work as manager Brother Love. Prichard also hosts the popular podcast “Something to Wrestle.”