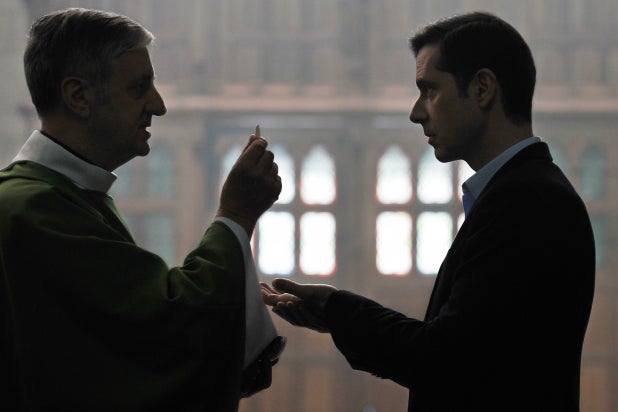 Versatile in a way that few directors at his level of recognition dare to be, prolific French auteur François Ozon follows his psychosexual thriller “Double Lover” with a multi-narrative drama based on true events. “By the Grace of God” offers a masterfully structured and sublimely acted account of a group of men reckoning with childhood sexual abuse at the hands of a priest neglectfully entrusted with their innocence.

While a procedural like Tom McCarthy’s “Spotlight” took a journalistic angle on the subject, and Pablo Larraín’s “The Club” functioned as fiery character study centered on the perpetrators, Ozon’s compassionate and ideologically balanced take on the Catholic Church’s disgraceful inaction against pedophilia within its ranks serves the victims’ stories first and foremost. The ramifications of the ongoing suffering caused by such despicable criminal acts guide the film through the lives of three distinct survivors.

Email correspondence in voice-over form provides a crucial device for the plot’s first act, as Alexandre Guérin (frequent Ozon collaborator Melvil Poupaud), a married father of five living in Lyon, attempts to navigate the proper channels inside the institution to urge Cardinal Barbarin (François Marthouret) to investigate Father Bernard Preynat (Bernard Verley, “Chloe in the Afternoon”), who abused him as a kid and still interacts with children despite the diocese’s awareness of his conduct.

Poupaud plays Alexandre with the precision required to vividly portray torturous ambivalence. As someone whose religious faith remains strong notwithstanding his experience, and whose children attend the same Catholic school he did, Alexandre wants the Church to fix itself without airing more of its dirty laundry. Going public with his case doesn’t align with what he sees as correct course of action, and unsupportive parents heighten his already conflicting emotions. “Do you still believe in God?” his eldest son asks him curiously, a question too loaded for him to dismantle in one answer.

Brief and tactful flashbacks take us back to the scouts’ camp and the photography lab where Preynat preyed on boys with impunity. In the present, the now feeble old clergyman never denies the harm he inflicted but puts the blame on his superiors, who didn’t stop him. Verley’s personification of the reviled character is more pitiful than monstrous, an ill individual willing to meet his accusers, though he continues to infantilize them. Although believed to have molested scores of children under his care, Preynat knows it’s unlikely he’ll be defrocked.

Meanwhile, Barbarin, who fancies himself a revolutionary force in close contact with the Pope, rejects the term “pedophile,” claiming it undermines pure affection towards the youth, and noting “pedosexual” would a more accurate descriptive. Later in the ordeal, Barbarin utters the movie’s title in a sentence so repugnantly shameless it sends shockwaves through one’s system as his true colors manifest. Even if Ozon practices utmost objectivity — as much as possible considering what’s being discussed — and avoids sensationalism that generalizes any group, the reaction of the Church’s representatives on screen, based on facts, doesn’t make for a flattering look.

Shifting perspective to François Debord (Denis Ménochet, “Inglorious Basterds”), a burly family guy whose parents were always on his side upon discovering what he endured with Preynat, the narrative changes from individual battle to collective effort. Armed with a letter of confession and documentation that corroborates higher-ups knew of the Father’s perversion, François assembles a community of affected men now seeking justice through legal avenues and media exposure, even if most of their claims are outside of the restrictive statute of limitations.

In François’ determination, Ozon finds an atheist protagonist who, unlike Alexandre, bears much more virulent sentiments against the Church. Tensions between François and the other members of his newly formed organization, Lift the Burden, arise from his radical yet warranted approach. Relevant discussions regarding the fear of coming forward and handling the press, as well as how economic class influenced how each family handled the tragic situation, are interspersed in the writer-director’s brilliantly written, character-driven screenplay. Editor Laure Gardette (“Capernaum”) earns special praise for the virtuous assembly of the elaborate and intermingling storylines.

Trauma, even if dormant for decades, is an inescapable psychological force, as the arc of Emmanuel Thomassin (Swann Arlaud) powerfully exemplifies in a marvelous and devastatingly heartbreaking third segment. A physical deformity, violent seizures, and the inability to forge relationships grounded on true intimacy are the results of his contact with Preynat. Arlaud, in a standout performance among a multitude of gifted actors, shows us a young man fighting to keep his head above the waters of despair, for whom meeting others understanding of his deepest pain is a life-saving blessing. Speaking their truth in unison, this is a brotherhood born of shared wounds.

One of Ozon’s finest efforts to date and one of 2019’s must-see releases, “By the Grace of God” bolsters an ensemble cast comprised of many of France’s most respected actors for a subtly galvanizing stunner that observes human beings hurting with a sympathetic gaze, never minimizing or exaggerating their emotional turmoil. Ozon manages to instill a measured touch into every argument, outburst, and testimony, matching the naturalistic cinematography (by Manuel Dacosse, “Let the Corpses Tan”) and bestowing on us the most important and assured movie on this treacherous topic made this decade.