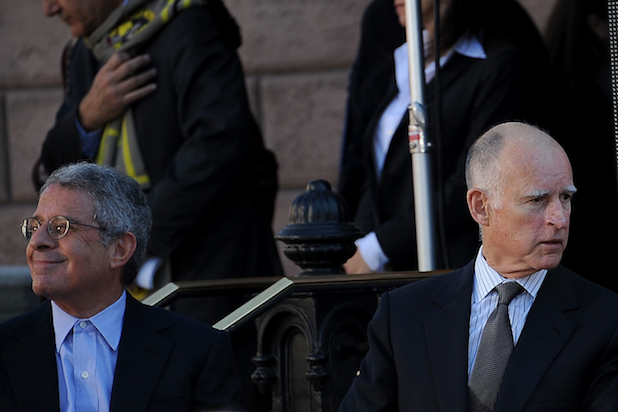 For 16 years, Chef Robért Catering has fed the casts and crews of some of Hollywood’s biggest movies and TV shows, from “The Dark Knight Rises” to “The Mentalist.” But as more productions chase generous tax subsidies out of state, principal Ray Bidenost wonders if  he made a mistake investing so heavily in California.

“I know a major studio that is working on a big-budget film and they keep encouraging us to open up shop in London,” said Bidenost, who’s established branches in production hotspots such as New Mexico and Georgia but recently bought and revamped a $4 million facility in L.A. “They keep saying, ‘You’ll stay busy if you’re in London,’ but I don’t want to be in London, I want to be here.”

With films such as the upcoming “Star Wars” trilogy, “Hunger Games” sequels and “Batman vs. Superman” all filming out of state or overseas, that may no longer be a viable business decision.

Runaway production is spurring the California state government to consider expanding its $100 million film tax incentive to include big-budget films and broadcast network and premium cable shows. The current incentive program limits qualifying productions to films with budgets under $75 million and basic cable programs; it also oversubscribes, with the California Film Commission typically exhausting its allotment by the very beginning of each fiscal year.

Legislation will be introduced this week by Democratic state Assemblyman Raul Bocanegra, with the backing of Los Angeles Mayor Eric Garcetti and a coalition that includes production guilds and the film industry’s lobbying arm, the Motion Picture Association of America.  If it passes the state senate and general assembly, a signature decision by Gov. Jerry Brown is expected by next Labor Day.

Currently, more than 40 states and a dozen countries offer some form of tax incentive, and the consequences are being acutely felt in the entertainment capital.

To make their case, the MPAA, the mayor’s office and their allies plan to focus on the threat to middle-class entertainment industry jobs.

“It’s all about job creation and keeping our crew members working, and that filters down to all the small businesses that depend on a vibrant entertainment economy,” Amy Lemisch, executive director of the California Film Commission, said.

She noted that the current incentives are out-stripped by those offered in the United Kingdom, Louisiana or New York.

“Our program is more modest, but you don’t want to give away more than you have to,” Lemisch said. “You want to make it competitive enough so it makes financial sense when producers realize they don’t have to incur as much shipping and travel expenses.”

The threat to California jobs is real, but tax incentives remain controversial even among members of the entertainment industry. Scott Ross, co-founder of the visual effects house Digital Domain, notes that the current situation has become an arms race with no end in sight. It’s one that he argues has devastated California’s post-production industry and forced workers to uproot their lives and families to work in cities such as Vancouver and London that offer richer incentives.

“Tax subsidies and incentives are like curing heroin with methadone,” Ross said. “You may not be addicted to heroin any more, but now you’re addicted to methadone. You’re not solving the problem, you’re just dressing it up.”

Proponents of the program argue that the current tax incentives have kept jobs in the state and paid for itself, reporting that the $100 million invested in incentives returns $792 in direct spending to California annually. Since the incentives kicked off in 2009, more than 200 film and television productions have taken advantage of the program, contributing $1.5 billion in paychecks to below-the-line crew, according to the California Film Commission.

Other studies offer credible evidence that the numbers don’t always work out. One 2008 study by Massachusetts, for instance, found that for every dollar of film tax credits the state recouped only 15 cents in revenue.

“Twenty five years ago, we didn’t have to pay major studios to make films, so why do taxpayers have to pay for it now?” Susan Christopherson, a professor at Cornell University’s city and regional planning department, said. “Where’s the capital to finance films? Why are producers having such trouble finding the capital?”

Any legislation will ultimately need the approval of Gov. Brown, who has yet to signal support or opposition. That’s standard procedure for the governor, who frequently avoids taking a stand on high-profile issues until late in the game to maximize leverage. He did sign the last extension of the program and, in a nod to Brown’s camp, the new legislation won’t have a dollar figure attached initially.

“I think most people can see the situation is pretty dire now, and that we’re definitely not crying wolf” said Kathy Garmezy, associate executive director, government and international affairs at the Directors Guild of America, which is part of the coalition. “We’re still working at it, but I think a growing number of people understand that it will benefit regions all over the state, that it really will have an impact on the middle class, and that this isn’t just a ‘Hollywood’ issue.”