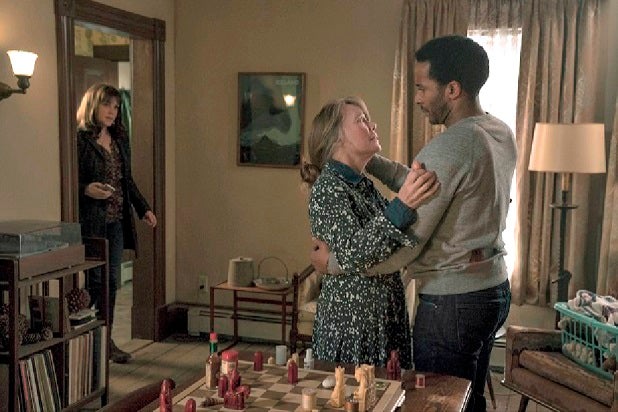 (Note: This post contains spoilers for the finale episode of “Castle Rock.”)

Throughout the first season of Hulu’s “Castle Rock,” Ruth Deaver has struggled to deal with her life as an Alzheimer’s patient — but the show has teased that something more might be going on with her.

The finale episode seems to finally come down on the truth, one way or the other. And it seems that the condition Ruth (Sissy Spacek) has been grappling with all season is more than Alzheimer’s disease.

The suggestion that more was going on started back in Episode 7, “The Queen,” when we spent a whole episode seeing everything Ruth was experiencing from her perspective. Her life with her condition means she experiences time out of order and out of sync — sometimes she’s in the present with other people, and other times, she’s reliving events from her past.

Ruth places chess pieces around her house in the present, which she explains help her maintain her grip on where and when she is; if she finds a chess piece, she knows it’s “now,” essentially, and finding a chess piece helps bring her back to the present.

“Romans,” the last episode of the season, though, finds Ruth standing on the edge of a bridge in the middle of Castle Rock, as we’ve seen her do before (and the one time that she actually jumped). She’s discovered by Molly (Melanie Lynskey), and Ruth says that she and Molly have had this conversation many times before. Every time, nothing Molly says is enough to dissuade Ruth from choosing to jump rather than live with the knowledge that she killed Alan Pangborn (Scott Glenn).

This time, though, Molly intuits what’s been happening to Ruth, and asks her a question based on her conversations with the Kid (Bill Skarsgard). She asks her one question: do her memories include her leaving her husband, and she and Henry (Andre Holland) leaving Castle Rock behind with Alan?

Ruth says that Molly has never asked her that question before, and the implication is that she has, in fact, experienced that before. And that’s an element of the alternate universe version of Castle Rock that the Kid described last week in Episode 9, “Henry Deaver.”

It seems that what Ruth is actually experiencing is that she’s briefly bouncing between the different realities that converge on Castle Rock, known as “the schisma,” as Odin Branch (Charles Jones) explained in Episode 6, “Filter.” That would track with some of the things we saw in “The Queen,” like Alan coming to investigate the gunshot that seemed to be the one fired when Ruth killed him, and the fact that she seemed to find herself holding the queen chess piece somewhere other than the present.

Between “The Queen” and that final revelation in “Romans,” it seems clear that Ruth’s condition goes beyond simple confusion about her own memories. She might not have traveled between the two worlds, like the Kid claims he and Henry have done, but it seems the schisma affects more than those few people who can hear it.