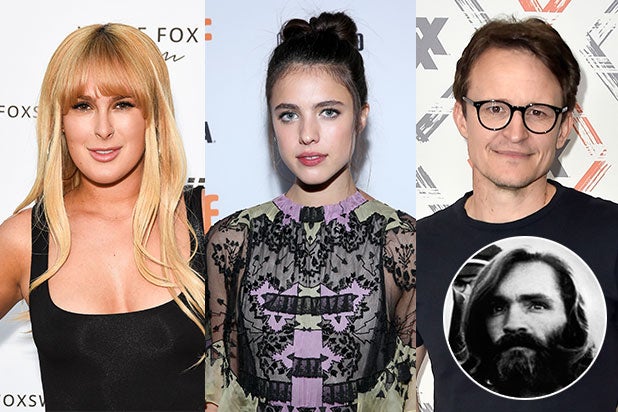 Quentin Tarantino is filling out the cast of his 1969-set “Once Upon a Time in Hollywood” with rising stars Rumer Willis, Dreama Walker, Margaret Qualley, Costa Ronin, Damon Herriman, Victoria Pedretti and Madisen Beaty, TheWrap has learned.

Herriman, an Australian actor best known to American audiences for a recurring role on “Justified,” has been cast as Charles Manson — the notorious cult leader whose self-styled “family” committed multiple murders in the year when the movie takes place.

Tarantino’s “Once Upon a Time in Hollywood” visits 1969 Los Angeles, where onetime TV star Rick Dalton (DiCaprio) and his longtime stunt double, Cliff Booth (Brad Pitt), make their way in an industry they hardly recognize anymore.

The ninth film from the writer-director features a large ensemble cast and multiple storylines in a tribute to the final moments of Hollywood’s golden age.

The film is written and directed by Tarantino, who also produced along with David Heyman and Shannon McIntosh.

Margaret Qualley is represented by UTA, Management 360, and attorney Harris Hartman. Her credits include “The Leftovers,” “Nice Guys,” and “Novitiate.”

Ronin is a Russian-born actor and cinematographer who most recently starred in the hit drama series “The Americans” on FX for 5 seasons. He can also be seen starring on “Homeland” as Yevgeny Gromov. He will next be seen in the Warner Brothers feature film “Honey In the Head,” alongside Nick Nolte and Matt Dillon. Ronin is repped by Framework Entertainment, Paradigm, and Schreck Rose Depello Adams.

Dreama Walker is represented by Gersh.

Damon Herriman is represented by manager Spencer Robinson at Art/Work Entertainment. His American agent is Carlos Carreras at APA, and his Australian agent is Lisa Mann at LMCM.

He will soon be seen in Jennifer Ken’s “The Nightingale,” which premieres next week at The Venice Film Festival. He also stars opposite Mia Wasikowska in the upcoming feature “Judy and Punch.”

Madisen Beaty’s credits include working with Paul Thomas Anderson and Joaquin Phoenix in “The Master” and with Molly Shannon and Jesse Plemmons in the Chris Kelly directed Sundance darling “Other People.”