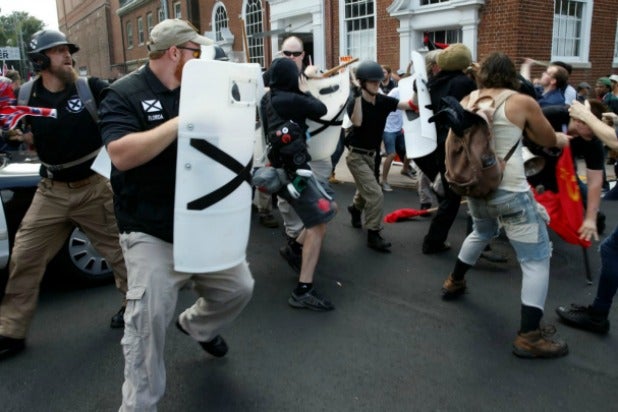 As violence erupted in Charlottesville, Virginia on Saturday morning during a protest held by white nationalists, Hollywood denizens took to social media to register their disgust over the violence.

Rob Reiner was more balanced in his reaction, though he squarely put the blame for the situation at President Donald Trump’s feet.

“Let’s be clear. The hatred we’re seeing in Virginia lies at the feet of Donald Trump. Stoked during the campaign,his silence condones this,” Reiner wrote.

“I DREAM OF @Lesdoggg RIDING A DRAGON OVER THE CROWD OF NAZIS IN VIRGINIA COMMANDING “DRACARYS,” Fuller wrote, referring to “Saturday Night Live” actress Leslie Jones, who has been a target of harassment by right-wing factions on social media.

We have nazi sympathizers and white nationalists in the White House. Condemn them too. They should not be receiving taxpayer money.

. @realDonaldTrump too afraid to do the right thing cuz you will lose votes? Doesn't matter, younger generation has the answer to #BeKind.

United WE stand..The most important word is WE..Once again WE. No race is better than another..STOP THE HATE! Praying for Charlottesville Va

being a privileged white non-US citizen, i feel like tweeting to reinforce how horrific POC treatment here is is unnecessary & inappropriate

i just want to say i'm so, so sorry. all white people are responsible for this system's thrive and fall. we have to do better. i'm sorry

CALL IT WHAT IT IS. IT. IS. TERRORISM.

It's sad what's going on in Charlottesville. Is this the direction our country is heading? Make America Great Again huh?! He said that????????‍♂️

It's darkest just before the dawn. We can fix this. We have no other option. https://t.co/0uRp6l79mp

MANY SIDES?!? Ive typed and deleted at least 8 tweets. Words simply arent strong enough to accurately describe how I feel about Donald Trump

By the way, fuck these nazi motherfuckers. #Charlottesville

Let’s be clear. The hatred we’re seeing in Virginia lies at the feet of Donald Trump. Stoked during the campaign,his silence condones this.

Donald Trump mocked Barack Obama for not calling Islamic Terrorism by its name.

Now HE must call White Supremacy Terrorism by its name.

This is on-purpose vague bc ur a wimp that stands 4 nothing & ur ignorant arrogance &total lack of impulse control is gonna get us killed https://t.co/rzcZcZmYDS

"Let's put on our asshole costumes and go down there!" https://t.co/kDEUjRQAXH

He is a puppet. An uncontrollable moronic puppet his masters can partly control. I hope we survive this awful mistake. Register2vote. https://t.co/lUiFEOEXXB

This was not free speech…this is chaos disrupting society.Disturbing & disappointing to witness. Be safe, Wahoos!#charlottesville #uva

I'm thinking of all the anguished people of Cville and anyone else effected by this & to those going through anything. I love you. #LoVE

I will speak of the tragic events in Cville, my city, as soon as I digest the events of the past 24 hours, especially today.#peace #LoVE

My alma mater. Saw my share of confederate flags on Rugby Road back in the day… https://t.co/LkKuxYuZMS