Just as they did over the holiday season, "Alvin and the Chipmunks" and "Sherlock Holmes" battled each other for top spot on the DVD sales chart this week. For this round, at least, the cuddly rodents bested the Baker Street sleuth, according to Rentrak. 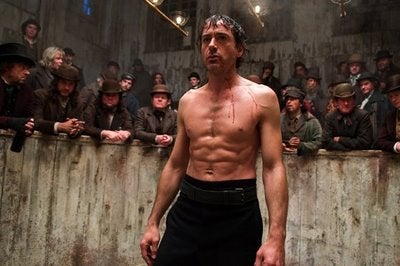 On the rental side, however, Robert Downey Jr.’s crack detective was far and away the victor. In its second week of release, "Chipmunks" fell from the fifth to the ninth spot on the rental charts, while "Sherlock Holmes" maintained its hold on the first slot.

It was a good week for Warner Brothers, which in addition to seeing its "Sherlock Holmes" burn up the rental and sales charts, also fielded another hit film, "The Blind Side." The Sandra Bullock football drama third place on both the rental and sales sides. Somewhat improbably, box office disappointment "The Men Who Stare at Goats" actually rented more DVDs than "The Blind Side," earning second place, though it lagged far behind on the sales end — failing to even make it into the top ten.

In its sixth week of release, Roland Emmerich’s disaster film "2012" continued to be a strong performer, holding onto the fourth spot on the rental charts for the second straight week. Werner Herzog and Nicolas Cage’s drug fueled "The Bad Lieutenant: Port of Call New Orleans," rode its strong reviews, but low theatrical grosses to fifth place on the rental charts.

Rounding out the top five selling DVDs were "The Twilight Saga: New Moon" and a special edition of Walt Disney’s animated film "Alice in Wonderland."