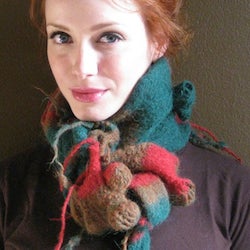 A tipster sent us this photo of "Mad Men" star Christina Hendricks modeling a knit scarf on the online fashion, arts and crafts marketplace Etsy.com.

Mello was one of the bridesmaids at Hendricks' October 2009 wedding to actor Geoffrey Arend. She sells housewares, clothing and jewelry on Etsy under the names Blackbird Design House and Madre de Olivia.

Mello is also an actress, best known for playing Lily Esposito on the high-school dramedy "Popular," which ran from 1999-2001 on the dearly departed WB.

Hendricks has recently become one of the more highly sought-after faces in the fashion world. In February 2010 she appeared on the cover of New York Magazine's spring fashion issue, and in April 2010, she was named "America's Best Looking Woman" by Esquire Magazine.