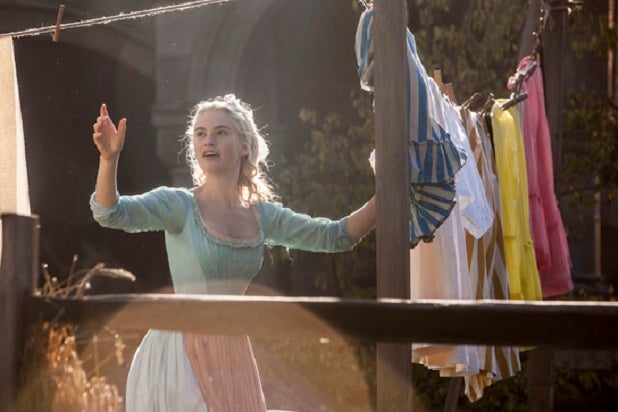 Both Disney and IMAX are hoping to do some transforming of their own with “Cinderella,” the big-screen fairy tale about the made-over handmaiden.

IMAX wants to draw more women than it typically does with its male-skewing action fare, and Disney wants those guys to give the female-skewing “Cinderella” a look.

It’s working for both, at least based on this weekend’s $70 million debut for the live-action update of the storybook classic.

The $5 million that the 358 IMAX theaters delivered in grosses was a March record for 2D PG-rated movies. And Disney saw the number of men and boys in the audiences for “Cinderella” rise as the weekend progressed. Part of that had to be IMAX, which accounted for 15 of the film’s top 20 domestic engagements.

“We make a lot of movies that appeal to the demographic they’re looking to build,” said Disney’s distribution chief Dave Hollis, a reference to the “princess power” that has driven box-office hits like “Frozen,” “Maleficent” and now “Cinderella.”

“If we can help them with that by being a sort of Trojan horse, that’s fine with us,’ said Hollis, who said Sunday that he was happy to see the male numbers tick up after the first night of “Cinderella” drew crowds that were 77 percent female.

“There’s no doubt that this will help us have a bigger footprint with female moviegoers,” said Greg Foster, IMAX Entertainment president, who expects the trend to continue . “The more people that see it the better, because it really is a beautiful film.”

Still, the eye-popping sets, staging and costumes of “Cinderella” are a long way from the staggering galactic horizons of “Gravity,” or the swordplay and monsters of the “Hobbit” movies. They draw audiences that are usually about 60 percent male to IMAX.

“In the past, we largely steered clear of family fare, in part because we didn’t think parents would want to shell out for the higher-priced tickets,” said Foster. “We wouldn’t have played ‘Cinderella’ a year ago.”

But last year changed the minds of IMAX decision-makers.

“We stayed on the sidelines for both ‘Frozen’ and ‘The LEGO Movie,’ and when we saw the kind of business they did, we realized that getting even a portion of that would be smart. We’ve evolved.”

It’s part of a new strategy at IMAX, which is trying to breathe life into its typically slower “shoulder periods,” such as January and February or the time before schools are out, when the superhero and action fare its fans favor are hard to find.

Maximizing grosses during those periods requires making decision on movies later in , and gambling on non-traditional IMAX offerings like a special run of TV’s “Game of Thrones,” the R-rated “American Sniper” and “Fifty Shades of Grey” and now, “Cinderella.”

It’s working, says Foster, though he can’t provide detailed first quarter numbers because IMAX is a publicly traded company. But you don’t have to look far beyond the blockbuster numbers of “Sniper,” “Fifty Shades” and “Cinderella,’ or the buzz generated by the “Thrones” run, to see that the company is having an exceptional first quarter

“Our pillar titles, like Christopher Nolan movies and the Marvel titles will always be firm,” said Foster. “But for the other 25 or 30 films we do, we have to be nimble and show more flexibility.”

And maybe those guys who check out “Cinderella” will be more flexible, too. Ditto with the gals, who for the first time might find Prince Charming on a giant screen.