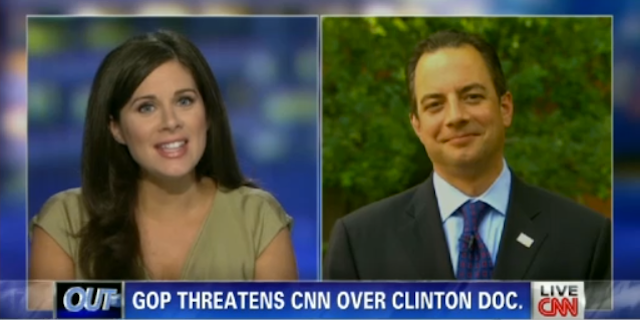 And just what is your "specific problem," Reince Priebus?

CNN's Erin Burnett got to confront RNC chair Reince Priebus over his threats to pull GOP primary debates from the channel should it go ahead with plans to produce a documentary about Hillary Clinton. On Tuesday's "OutFront," Burnett asked Priebus what his "specific problem" with the film is.

Priebus answered that it seemed like a conflict of interest for a news organization to implicitly support a candidate. The RNC has issued the same threat to NBC for its mini-series about the former First Lady who's rumored to be running in 2016.

"You ought not be doing feature films or documentaries and miniseries about what we know to be a very likely candidate," Priebus said. "CNN and NBC can do what they want to do. That's their right. But it's also my right, Erin, as chairman of the party, to say if you go forward with this then I'm going to choose not to include you in the debate process and the moderating of our primary debates in our party. I think this is a reasonable thing for me to be doing."

Even conservative media watchdog group Media Matters agreed with GOP, possibly for the first time in recorded history. On Tuesday, founder David Brock sent letters to CNN and NBC urging them to cancel their Clinton plans.

Priebus said it didn't matter to him if the documentary's portrayal of Clinton was largely negative or positive, as elections are often a "cult of personality" … "unless you're an idiot like Anthony Weiner."

CNN has said that its news division has nothing to do with the CNN Films banner the documentary is being produced under.