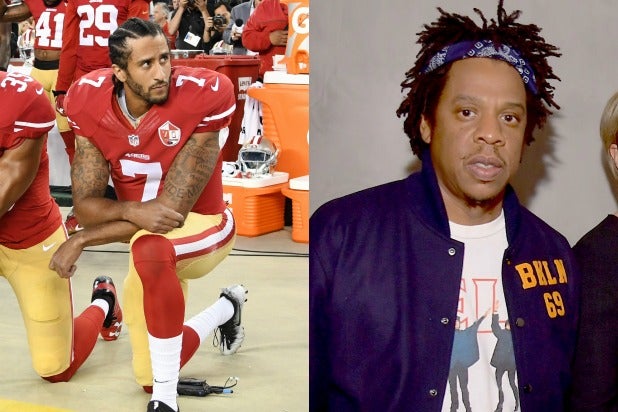 Colin Kaepernick has voiced his support for NFL players who continue to kneel during the National Anthem in a new social media post made after the league announced social justice initiatives as part of an entertainment deal with rapper Jay-Z’s Roc Nation.

“My brothers [Eric Reid, Kenny Stills and Albert Wilson II] continue to fight for the people, even in the face of death threats,” the former San Francisco 49ers quarterback wrote on Instagram Sunday. “They have never moved past the people and continue to put their beliefs into action. Stay strong Brothers!!!”

Jay-Z had previously supported Kaepernick’s acts of protest during the National Anthem, even bragging in a song released last year that he refused to perform at the Super Bowl. But now, he has signed a deal with the league to become a “live music entertainment strategist” and advise the league’s social justice campaign “Inspire Change.”

TMZ also reports that the music mogul will also receive a “significant ownership interest” in a NFL team, though which one is not currently specified. Both deals have earned criticism from Kaepernick supporters like The Atlantic columnist and former ESPN commentator Jemele Hill.

“Jay-Z isn’t getting enough out of the deal to justify the sacrifice of some of his credibility,” Hill wrote this past week. “This alliance plays right into the NFL’s hands, because the league seems determined to banish any memory of Kaepernick with its recent social-justice efforts–even though it’s likely that Jay-Z and the NFL wouldn’t even be entering into this arrangement if Kaepernick hadn’t taken a knee in 2016.”

“I see two parts of protesting. You go outside and you protest; and then the company or the individual says, ‘I hear you. What do we do next?'” Jay-Z said at the press conference earlier in the week announcing the deal. “I think we have moved past kneeling. I think it’s time for action.”

“We forget that Colin’s whole thing was to bring attention to social injustice,” Jay-Z added. “In that case, this is a success. This is the next phase.”

But the rapper’s comments were scorned by Carolina Panthers safety Eric Reid, who has been one of the most vocal kneelers since Kaepernick opted out of the final year of his 49ers after the 2016 season and was not signed by another team. Kaepernick and Reid sued the league on collusion charges after both players went an entire offseason without being signed and received a settlement reported to be less than $10 million.

“When has Jay-Z ever taken a knee?” Reid told reporters on Friday. “Yes, he’s done a lot of great work. A lot of great social justice work. But for you to get paid to go into an NFL press conference and say that we’re past kneeling? Again, asinine. Players Coalition 2.0. He got paid to take the bullets that he’s taking now, because we’re not having it.”

My Brothers @e_reid35 @kstills @ithinkisee12 continue to fight for the people, even in the face of death threats. They have never moved past the people and continue to put their beliefs into action. Stay strong Brothers!!! ✊????