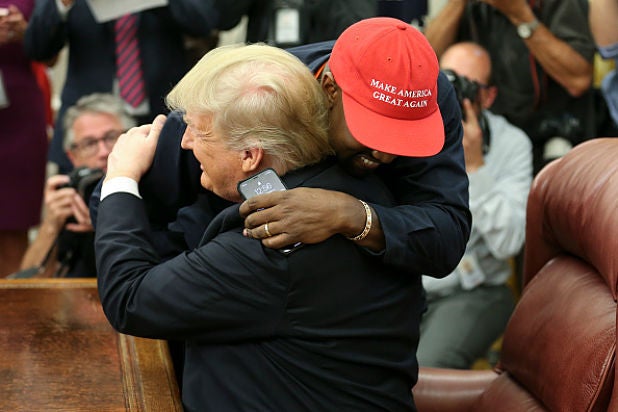 Plenty of people are furious with Kanye West for aligning himself with President Donald Trump, but comedian Dave Chappelle isn’t one of them — even if he thinks Ye “shouldn’t say all that s—.”

In an interview with CNN’s Van Jones taped earlier this week and set to air Saturday night, Chappelle defended the “Gold Digger” rapper as an artist and “a person of intent,” and also said that Ye’s recent behavior seems like a reaction to our divisive times.

“First of all, Kanye’s an artist, man, and he’s a genius, and whatever he’s saying right now, I think that the angle he’s seeing things from is about division that we see,” said Chappelle. “And he’s not inconsistent with what he’s saying, for instance, a decade ago I read a quote where he said he wanted to take the confederate flag and reappropriate it some different kind of way.”

What really worries Chappelle about the Trump era, he told Jones, is what’s going to happen when Trump is no longer in office. “I don’t know if you’ve been married before, or had a girlfriend, and said something in a fight that was so wrong,” he said, “and then after that? We’re still family, we’re still around each other. But man, I did say all that s—.”

So Chappelle isn’t angry, even if he does think West needs to quit it with all the pro-MAGA talk.

“I’m not mad at Kanye, that’s my brother, I love him, I support him,” the comedian continued. “I don’t have to agree with everything that he says, I just trust him as a person of intent. But, uh, yeah he shouldn’t say all that s—.”

Also Read: Dave Chappelle Sued by Guy Who Threw a Banana Peel at Him

West has been increasingly vocal in his support of Trump. Earlier this month, he also sparked outrage and confusion when he started speaking out against the 13th amendment, which abolished slavery in the United States, arguing that “we will no longer outsource to other countries. We build factories here in America and create jobs.”

Of course, West also met with Trump at the White House on Thursday for a lengthy meeting that CNN’s Don Lemon condemned as a “minstrel show.” However, before you ask, Chappelle’s interview with Jones was taped before that meeting of the minds, so we’ll have to wait to see how he felt after that.

The interview, in which Chappelle appeared onstage next to Maryland gubernatorial candidate Ben Jealous, will air Saturday at 7 p.m. ET.

You can watch the clip here.