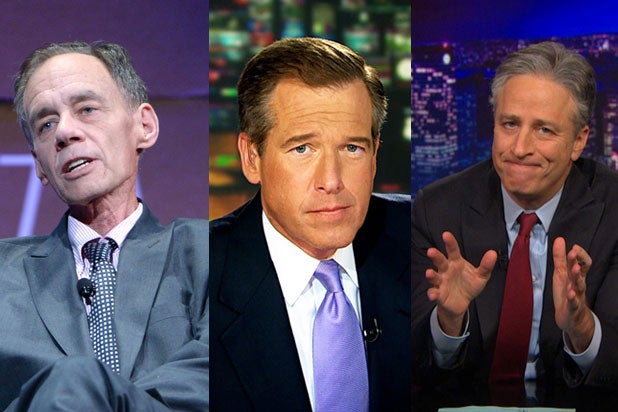 It was a horrible, no good, very bad week for journalism.

It started out with the disgracing of Brian Williams. The anchor, with his wartime lie and humblebrag apology, opened the week in the crosshairs. He said he was sorry for misremembering getting shot at by an RPG on a US military helicopter. Cue the media machine — the 24-hour cable news bulldozer, fed by nonstop buzzing on Twitter and Facebook — which cranked into gear. What did Brian Williams know? When did he know it? What did NBC know? Should he be fired?

All of us who cover media pre-wrote stories about Williams’ suspension or termination — filling in the blank when the news came down on Tuesday that the anchor faced a six-month suspension from furious CEO Steve Burke.

Of course that set off another round of squawking on the cable machine, but that news was practically overshadowed by the unexpected resignation of Jon Stewart — the fake-news anchor whom we all rely on for actual news as well as entertainment and insight and, often, the national pulse.

Stewart told his audience he was stepping down at the end of the year — minutes before Williams’ suspension. The previous night, Stewart had delivered a lengthy segment scolding his anchor pal (a guest some dozen times on the show — “Why??” Stewart wailed) and mocking the media establishment over its evisceration of Williams for lying about the war after giving the government a pass for the lies that got us into Iraq in the first place.

Mocking the media establishment is a critical function that Stewart fills, along with speaking truth to power in the guise of humor on a daily basis. Stewart’s pending departure, coming in tandem with the loss of Stephen Colbert, is the more profound loss when compared to the silencing of Brian Williams, who increasingly appears to have been acting like a celebrity sold on his own publicity.

It’s dangerous to a democracy when comedians better understand their role as truth tellers than the professional truth tellers do.

But it didn’t stop there. The next day — Wednesday — God offered up some black humor in the sudden death of “60 Minutes” correspondent Bob Simon. I worked next door to Simon in my first foreign assignment, covering the Palestinian intifada in 1989. The Reuters office where I worked in Tel Aviv was adjacent to CBS’s offices, so we crossed paths as I learned to work the phones, the Foreign Office and the budding Palestinian media punditry. Simon was already a seasoned war correspondent and not a journalist to be trifled with, spending his days in the territories and headed back in to edit and file at night.

It is this side of incomprehensible that he would die in the back of a livery taxi on the West Side highway. He was a breed we don’t see anymore; the kind of fearless correspondent who went to the story and reported the facts on the ground (the sort that Williams was pretending to be, it’s worth noting). In the age of ISIS, I fear there are fewer opportunities for the Bob Simons of the world to bear witness. A great loss.

God wasn’t done laughing. Late Thursday we learned that David Carr, a former colleague of mine at The New York Times in the Culture department, collapsed in the newsroom, was rushed to hospital and died.

The outpouring of regret was immediate. This is arguably also because Carr died at the height of his influence as a media commentator — the must-read New York Times role that Frank Rich held just a few years ago, and that other great columnists have held in the past. As much as regretting the loss, we are all left thinking: who are we going to read on Sunday to know what the media thinks?

Carr, who also launched the Times’ Carpetbagger column to cover the Oscars race, was rare in that he both had the ability to do real reporting and to convey it with flair and wit. His personal journey — which included an addiction to crack cocaine and cancer — gave him a perspective that was rare and a vocal rasp that was either quaintly distinctive or wildly annoying.

Either way, at 58 he was too young to die. Though clearly his past battles had taken their toll on his body.

All in all a terrible week of losses for journalism. And come to think of it, I’ve just been reminded: I miss Christopher Hitchens too.